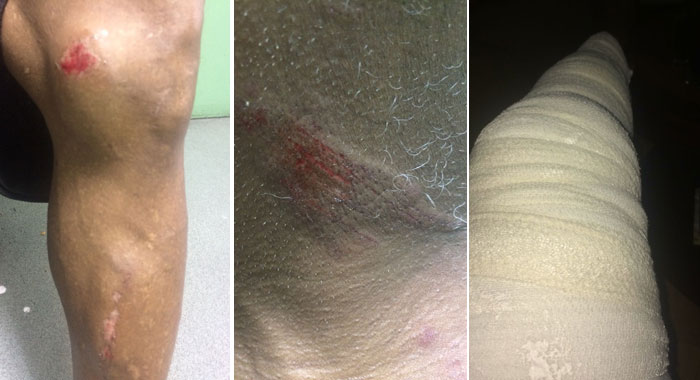 St. Clair Harris, 68, of Sharpes Dale, sustained injuries to his leg and neck, resulting in his leg being placed in a cast.

A senior citizen is wondering why police are yet to arrest a man who he said attacked him in his garden although police received real time information about the man’s location.

St. Clair Harris, 68, of Sharpes Dale, Central Kingstown, told iWitness News Thursday night that police were yet to arrest the man, three days after the incident and hours after he called them with information about the man’s exact location.

He said he was in his backyard garden at his fenced property about 5:30 p.m. Monday when he was attacked.

Harris said that while in the garden, he noticed another resident of the community trying to stab one of his dogs through the mesh fence that encircles his property.

Harris said he asked the man why he was trying to stab the dog, and the man left.

The property owner said he continued what he was doing in the garden.

He later heard his wife shouting to him to watch out.

Harris told iWitness News that when he looked around, he saw a stone coming towards his head.

He said he was able to shift just enough to avoid being struck in the head, but the stone caught him on the neck.

Harris said the man who had earlier tried to stab the dog was attacking him.

He said the man continued pelting him with stones, one of which caught him on the knee area, while another connected with his shin.

He said his wife raised the alarm and a neighbour came to his rescue just as he was about to pass out.

Harris was taken to the hospital where x-ray revealed a fractured bone and chips in his leg.

The leg was placed in a cast and he was discharged from the hospital.

He reported the matter to the Criminal Investigation Department in Kingstown and told the police who the assailant was.

His neighbour also gave a statement to police.

On Tuesday, when Harris called the CID, they said that they were working on his case and gave a similar response on Wednesday morning.

Harris, however, told iWitness News that when he called the department again Wednesday afternoon, an officer told him they had no record of his report.

He said that an officer, however, came to his house about an hour after to make inquiries.

“I have to laugh at the whole thing because if I could’ve walked, they would’ve had me arrested already,” Harris said.

He, however, said even more disturbing is the failure of the police to arrest the man, even after he received information from a relative that the information that the man was at home was relayed to them in real time.

Harris said that one of the man’s relatives, who heard about the attack, visited him (Harris) Thursday afternoon and told him that they have made numerous reports to the police, asking that the man be taken into custody.

He said also the relative told him that the man was at home at that very moment and he immediately called the police to relay that information to him.

However, up to when he spoke to iWitness News at 9:30 p.m. Thursday, the man was yet to be arrested, Harris said.

He said this was the case although detectives at CID had told him that other people had complained about the assailant and had raised questions about whether he had a mental health issue.

Harris, who works at a store in Kingstown, is at home on 10 days’ sick leave.

“Now I am here in pain. If I were to take the law in my hands, I will be in the wrong,” Harris said.

He said that he was lucky that his wife was at home and was looking on at what he was doing in the garden when the attack occurred.

“It is God that saved my life,” he told iWitness News. “I just tilted my neck and avoided being struck in the head.”

7 replies on “Elderly man says police not arresting his attacker”