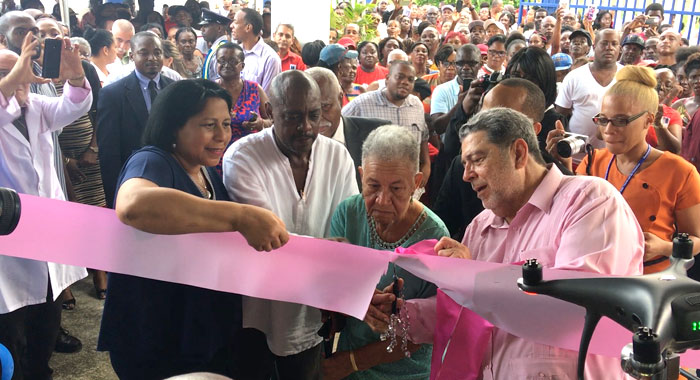 The accident and emergency (A&E) and x-ray departments as well as the pharmacy will begin operating today (Tuesday) at the EC$42 million Modern Medical and Diagnostic Centre (MMDC) in Georgetown, one day after its official opening.

The MMDC administrative services, a department of the hospital services programme, supervised by the Hospital Administrator, the Medical Director and the Senior Nursing Officer of the Milton Cato Memorial Hospital, commenced work prior to this official opening and will throughout the remainder of this week facilitate the full operationalization of the remaining services,” Chief Medical Officer, Dr. Simone Keizer-Beache said at Monday’s opening.

“This week will allow for the proper infection prevention and control protocol to be applied following today’s opening that allows access to the facility by the general public. The standard operating protocols, including fee structure and patient registration transfers will apply,” she further said.

“And we are not finished. We have future services to add,” Keizer-Beache said at the ceremony, which also heard addresses from Minister of Health, Sen. Luke Browne and Prime Minister Ralph Gonsalves.

She said the government intends to add mobile mammography services, add a second site for the Heberprot-P administration for patients with leg ulcers and expand both the range of ambulatory services and our diagnostic service.

In terms of primary care, the first interaction with the primary healthcare system takes place at the Georgetown Health Clinic, one of 39 that form the backbone of the nation’s community health care services, Keizer-Beache said.

Clients seen at the Georgetown Clinic or at any facility north of Biabou, can be referred to the MMDC for their laboratory investigation as the centre has full biochemistry and haematological laboratory on site and sample collection services for tests not done at the MMDC’s lab.

“They can also have their basic x-rays and ultra sounds done at this facility. They can collect their prescriptions from the pharmacy and receive their physiotherapy in the physiotherapy department.”

Keizer-Beache said that clients requiring further investigation or care for eye conditions, gastro intestinal or bowel conditions, cancer therapy, in terms of chemotherapy in their nine-bed chemotherapy unit, and haemodialysis in the nine-bed dialysis unit, will also be able to access that care at the MMDC.

Keizer-Beache said that ambulatory surgical procedures such as the removal of lumps and bumps, cataract surgery and endoscopies would be performed at the MMDC.

The chief medical officer said that in terms of acute care, the MMDC has a six-bed emergency room with a surge capacity to eight beds for emergency care and treatment only.

“Clients with coughs and colds and old complaints will continue to go to the district clinic. The emergency department is for emergencies previously seen at the Georgetown Smart Hospital.”

She said that patients requiring admission from the Georgetown District Clinic or from the MMDC accident and emergency department will be admitted at the Georgetown Smart Hospital or, if necessary, will be transferred to the Milton Cato Memorial Hospital in Kingstown.

Patients requiring short-term observation after having been seen in the A&E at the MMDC will be accommodated at the four-bed observation area.