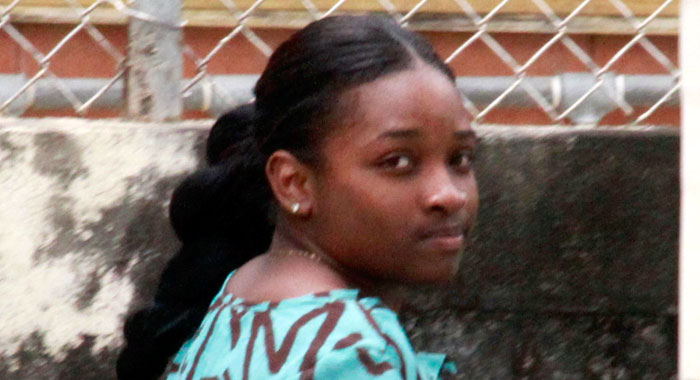 Britney Williams leave the Serious Offences Court on Monday after paying a fine for marijuana and cocaine possession. (iWN photo)

A 20-year-old woman who had passed through the Grenadines Wharf in Kingstown three times without being searched by police decided that she could risk transporting weed and cocaine on her next trip.

And, according to her account, it was on her fourth journey that Britney Williams, of Choppins, would be nabbed with the drug.

Williams was arrested at the Grenadines Wharf last Friday and charged with possession of 1,190 grammes (2.63lbs) of cannabis and 13 grammes (0.46 ounce) of cocaine with intent to supply.

She pleaded guilty to both charges when she appeared before Chief Magistrate Rechanne Browne Matthias as the Serious Offences Court in Kingstown on Monday.

The court heard that PC 340 Da Souza was on duty at Gate 5 of the ferry terminal.

He was dressed in plain clothes and a “police” vest and, along with other officers, was performing checks on persons travelling to the Grenadines.

While at his post, he saw P7616 approaching and signalled the vehicle to stop.

The police officer observed that the defendant, who was sitting in the front left passenger seat, had a number of black plastic bags at her feet.

Da Souza opened the packages in the presence of the defendant and PC 996 Lavia.

When cautioned after the discovery of the substances, Williams told the police officers, “Officer, is drugs. Weed. Ain’t no cocaine. Is me yo’ find with it. I was going to carry it Canouan.”

Williams, who is employed in Canouan, was arrested and taken to the Criminal Investigation Department in Kingstown.’

The chief magistrate told the defendant that she was especially interested in her reason why the court should not send her to prison.

“I particularly detest cocaine,” the chief magistrate said, adding that the woman also had a large quantity of marijuana in her possession.

The defendant told the court that it was her first offence.

“I am guilty of carrying the drugs,” she said.

She further told the court that she had been working in Canouan for three months.

The magistrate told Williams that she believes that she has transported drugs before.

Williams, however, told the court that it was her first time, adding that she agreed to do it because police officers had not searched her on the three occasions when she used the wharf on her way to the Grenadines.

“There is something called observation… So it may appear that they (police officers) are not doing anything up there,” the magistrate said.

She added that someone else was involved with the defendant and warned the woman that she does not know who might be giving information to whom.

She said that the woman’s only saving grace was that she was a first-time offender and had pleaded guilty.

The chief magistrate ordered Williams to pay the court EC$1,500 by the end of the day for the cocaine charge or go to prison for seven months.

On the cannabis charge, she ordered Williams to pay EC$2,500 by July 31 or spend eight months in prison.

However, she spent more than an hour holed up in the court building, trying to avoid being photographed by reporters outside.

Williams might have been misinformed about the layout of the court precinct and found herself against a locked gate at the side of the building with reporters on both sides of the gate.

Persons have been intercepted at the Grenadines Wharf with drugs, having used a variety of means, including a cereal box, and hollowed out yams to try to make their way past police with the illegal substances.