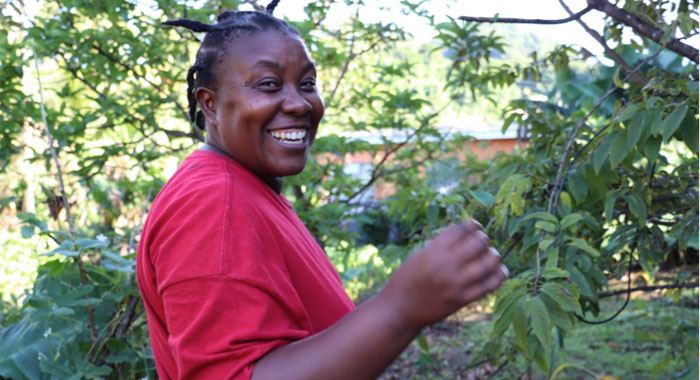 The Pass-it-On Sustainable Model Gardens will be evaluated along with national winners from 180 countries for nomination for the Energy Globe World Award later this year.

Under the project, which was supported by Canada Fund for Local Initiatives, a group of volunteers came to the RVA to assist single female heads of household to grow their own backyard gardens. As a result of the project, they have been able to eat healthier, chemical-free food and, at the same time, protect the environment against climate change.

The initiative has helped to foster a stronger sense of community and has helped participants to earn money by selling their surplus produce.

One participant, Valerie Bramble started her garden in 2010 near the beachside in Chateaubelair and is one of three gardens in this area.

She said that many Vincentian farmers, as a result of European and U.S. influence, think that it is normal to use chemical when growing food. This, she however said was not always the case.

“My mother made bread from scratch and we got the fish straight out of the sea and the food straight from the land. Now, everything in the supermarket is processed,” said Bramble, whose crops include avocado, lime, sugar apple, christophene and banana.

Bramble’s garden was designed so that the area furthest from the sea is coolest, benefitting from a micro-climate created by the supporting vegetation and, therefore, more applicable to the planting of vegetables.

The area nearest the sea is more focused on hardier crops that are more tolerant of drier conditions, such as cassava, sweet, potatoes and peanuts.

All crops are grown on raised beds constructed from bamboo.

Her water tank is located in such a way that it can gravity feed the lower garden closest to the sea.

The compost bin is situated directly outside Bramble’s kitchen, making it easy to deposit compost material.

Bramble said she first heard about the Pass-it-On Sustainable Model Gardens at the farmers’ market in Chateaubelair.

At the same time, she was introduced to the idea of permanent agriculture — permaculture — and was immediately enthused.

Maurice Edwards, another famer, explained how students at RVA had collaborated with her to prepare the land and the layout of the garden.

“Everyone can have their own garden if they put their mind to it.  It is not a hard task. The mulching is fun. It can be a good activity for your family.”

The farmers operate in a section of the country where they encounter yacht visitors, many of whom are willing to pay premium price for organically-grown agricultural produce.

The project has also helped them to use, in a very productive and economically beneficial way, time that might have otherwise been spent idling.

“I am very, very happy having my garden, it is one of the most beautiful things I have ever done. I love it. I am taking very good care of it and I will keep it up,” said Doreth Ashton, who is commonly known as Dolly.

For example, on one farm, the raised beds are constructed along contours on the hillside and supported by gliricidia tree logs.

Organic matter, including a lot of banana bodies were used to build up the level of the soil in these raised beds and provide a fertile medium for growing vegetables.

One garden was designed to benefit from the cooling microclimate provided by a red plum tree, a breadfruit tree, and a root of plantain.

This environment has enabled the growing of lush vegetables including lettuce, bok choy (pak choi) and tomatoes.

In some instances, vertical structures with mesh are provided for climbing crops and the necessary galvanised bins for compost and some farms have a chicken coup.

Stina Herberg, director of RVA, said that the institution is pleased to have been recognised, yet again, for its efforts at making sustainable agriculture part of the culture of St. Vincent and the Grenadines.

“Awards and recognition help all of us bring more awareness and action towards a more sustainable future. At Richmond Vale Academy, we continue to do our part.  By mid next year, together with the Home Garden Movement, we will have assisted families start up a total of 65 home gardens,” Herberg said.

“I personally have to say I am extremely pleased with this award and impressed by the efforts of homeowners. Such dedication, interest and talents in gardening are very inspiring and humbling to be part of.”

She said that RVA has a goal of helping to make 200 such organic gardens before 2021, the last year of the 10-year St. Vincent Climate Compliance Conference.

“RVA is also working on new plans to assist more people have and use renewable energy such as solar energy and biogas for cooking,” Herberg said.