Dialysis to begin at MMDC on Wednesday 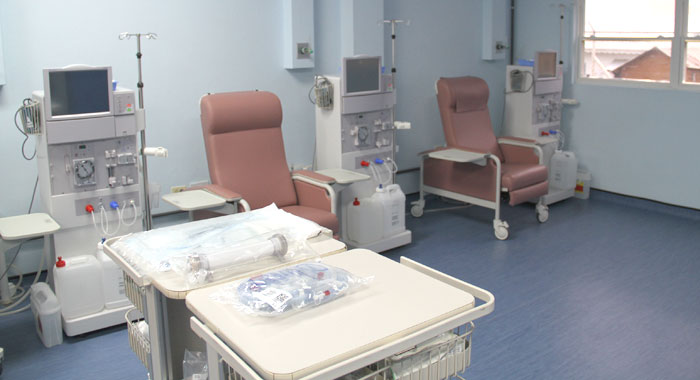 Some of the dialysis stations at the Modern Medical and Diagnostic Centre. (iWN photo)

Four persons have been identified to undergo haemodialysis at the Modern Medical and Diagnostic Centre (MMDC) in Georgetown on Wednesday, just over a week after the centre began operating.

“… but we may only proceed with about two [patients] just to ensure that everything goes well, first, then we can increase,” Miller told iWitness News during an interview on Friday.

She said that the centre is checking the filters and running tests on the water treatment facility to ensure that they are “ready to safely administer dialysis and chemotherapy starting on Wednesday”.

The accident and emergency (A&E) and x-ray departments as well as the pharmacy began operating last week Tuesday, one day after the official opening of the EC$42 million facility.

Miller said that since the opening, management has been “finalising in some of the areas — making sure that the pharmacy itself is fully equipped.”

She said that the pharmacy used to be at the district clinic and it has since been moved to the MMDC, which also includes the Georgetown Smart Hospital.

“There have been persons who have been calling or coming, inquiring about the services or to get clarity on how we proceed into receiving services.

“We are finalising in areas of oncology and nephrology,” Miller told iWitness News.

In the first three days of the operation of the MMDC, 40 persons have accessed the emergency room.

Four of them were admitted to the smart hospital, and one died at home after checking himself out of the healthcare facility.

The patient who died, a male, had tracheal stenosis — a narrowing of the windpipe that can occur after radiation therapy, prolonged use of a breathing tube, or other procedures.

“I would say for a small community, if I may use the word community, having 40 persons accessing the emergency room is on the greater side to me, for just Wednesday, Thursday,” Miller said.

She, however, told iWitness News that doctors considered some of these persons who had checked into the emergency room to be clinic cases.

The MMDC has become the first public health facility in St. Vincent and the Grenadines to offer hemodialysis.

“This is no doubt good news for Vincentians who need this type of treatment, and who would otherwise have a hard time affording it in the private sector. The cost of hemodialysis to an individual varies between $30,000 and $72,000 per year.”

“A person with kidney disease can live a relatively normal life if the appropriate treatment is available and affordable. One of the government’s goals is to prevent avoidable deaths by improving the quality of healthcare in SVG. The Modern Medical and Diagnostic Centre helps the state to achieve this goal.”

One reply on “Dialysis to begin at MMDC on Wednesday”