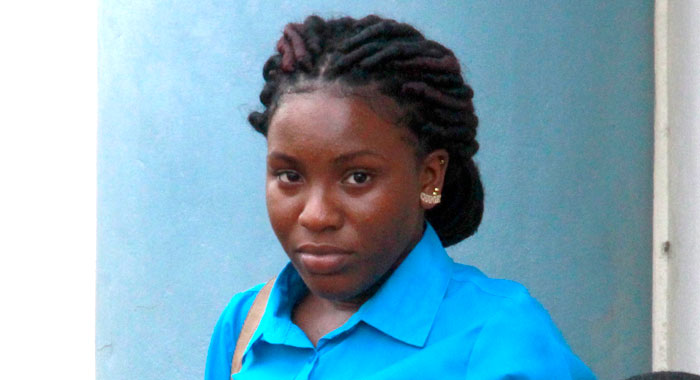 Chantae James will spend a week in jail before her sentencing hearing. (iWN file photo)

The trial of the young woman charged with splitting a Community College student’s lip with a knife in Kingstown on March 28, began on Friday, with the prosecution’s case painting a picture of an online fight over a young man escalating offline.

According to the evidence presented so far, the person at the centre of the fight is one Javid Lewis, with whom the defendant, Chantae James, had had a relationship.

Lewis was the boyfriend of the virtual complainant, Sakaina John, at the time of the March 28 incident.

James, of Old Montrose, is being tried on a charge that on March 28, at Paul’s Avenue, Kingstown, she wounded John, of Lowmans Leeward.

John told the Kingstown Magistrate’s Court that about 12:45 p.m. on March 28, she and her friend, Jézell Prescott, were on their way from school.

John was dressed in her Community College uniform, while Prescott was not.

She said they were walking, via Paul Avenue, to Kingstown Park, to go to the workplace of John’s mother — a teacher — to collect their lunch.

On the way there, she saw James standing on the sidewalk outside Caribbean Reference Laboratory, located near Bishop’s College, a secondary school.

John told the court that as that as they approached, she noticed James was staring at her and mumbling.

As they got closer, James who was holding a child, put the child to sit on the edge of a rectangular concrete flowerpot that was on the sidewalk.

John said she asked James what she was saying and James told her, “You have friend now. You bad.”

She told James that when she sees her, she should not interfere with her, and, in turn told Prescott “Let’s go,” John told the court.

John said she then saw James coming at her saying, “Girl! Girl!” as she (James) was unwrapping a knife from a piece of black cloth.

“And then she just cut ‘way me lip,” John said, adding that it took her about two seconds to realise what was going on.

“And she was kinda hesitating to charge on against me and when I started to move, I pushed her in the corner and then she cut me under my eye and she keep putting her hand over me and the knife caught me over my head,” John said in her evidence in chief.

She said that she and James eventually started to “wrestle up”.

“And she started to turn the knife to my chest. I eventually got away the knife and all of my four fingers were cut up. Everything came to a halt so I threw the knife on the ground,” John said, adding that her left fingers were cut because she had held onto the blade of the knife while trying to wrest it from James.

“All me blood was just pouring. She (James) stated that she don’t know if I have AIDS and I mek my blood go on her,” John told the court.

She said she was bleeding for a while before a woman came screaming, saying that someone should help her (John) because she might haemorrhage.

John told the court that a man took her to hospital and another picked up the knife and took it away from the scene.

In response to a question by prosecutor Police Constable Corlene Samuel, John told the court that the week before the incident, James had come to the Community College — which James does not attend — with friends.

But defence counsel Carlos James objected to this line of questioning, saying he did not see on the charge sheet anything related to a prior incident and was wondering what is the nexus.

“I am not going much further,” Samuel said, adding that she just wanted the court to know that there had been a prior incident.

John told the court that at the school, the defendant wanted to ask her a question but she ignored her.

She said that she did not have any communication with the defendant after the incident outside the school and before seeing her on the street in the nation’s capital.

On Friday, the court also heard the evidence of Prescott Renwick Bayne, a Justice of the Peace who intervened during the incident at Paul’s Avenue, and Detective Corporal Dwight James, the first officer to respond to the scene.

The court was hearing the evidence of the investigating officer, Detective Constable Sheffique Joseph, when the defence counsel complained that he had not received a caution statement in the bundle of documents that the prosecution had disclosed to him on July 2, as the court ordered.

The lawyer said it was the first time that he was hearing about a caution statement, adding that it was witnessed by another police officer and not even by a justice of the peace.

James said he was surprised that that was the sort of practice in which the police engage.

However, the prosecutor told the court that disclosure was done on July 2, the same date as the court made the order.

She said that James was scheduled to travel that day and maybe her office, in its haste to provide counsel with the documents before he left the country, inadvertently omitted the caution statement.

Samuel, however, said that as the trial was about to begin, she showed James all the documents she had and he indicated that he did not have the two-page caution statement.

The prosecutor said that the lawyer read the document before the commencement of the trial.

The magistrate adjourned the trial to July 24 to allow James to get a copy of the caution statement.