Woman leaves boyfriend with 16 stitches to his penis 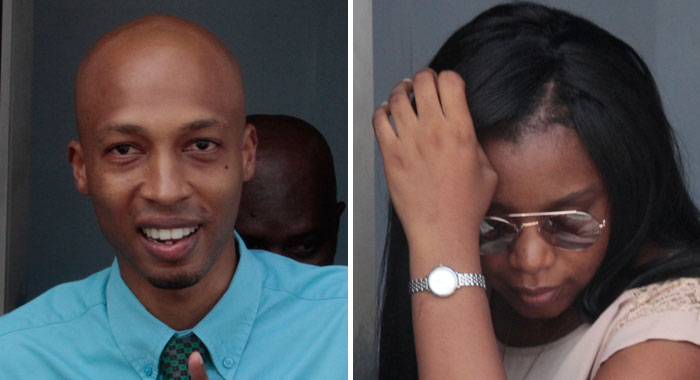 Senior Magistrate Rickie Burnett on Monday vacated a guilty plea by a woman who told the court she had accidentally inflicted the cut that left her boyfriend with 16 stitches to his penis.

According to the facts presented by the prosecution, Chandler had asked DaSilva to bathe their son and he refused.

He told Chandler that she had been at home all day doing nothing and that he had just come from work.

DaSilva and Chandler are in visiting relationship, and he told her that he would sleep on the floor for the night.

While he was asleep, Chandler took a piece of broken mirror, held DaSilva by his penis, and cut him on the organ.

DaSilva was treated at the Milton Cato Memorial Hospital and later reported the matter to the police.

When cautioned, Chandler gave a statement admitting to the offence.

As the hearing moved to the sentencing stage, DaSilva told the court that their son was not at home all day, but that he had brought the child home around 5:30 p.m.

He further said that he was not asleep when Chandler cut him.

“I was choked, my boxers (boxer shorts) were ripped off. My comment to her was she was not the boss of here so she should stop trying to be the boss. And then I was cut,” Da Silva told the court.

When asked about who is in charge of the house, DaSilva said that Chandler’s name is on the lease.

He further told the court that on the day in question, Chandler prepared hot water and said, “Somebody is going to die.”

At this point, the magistrate asked the defendant, “All that happened?”

Chandler told the court that an argument had developed between she and DaSilva over the child’s bath and escalated after DaSilva took up her phone.

“When she was choking me, I put down the phone and then she grabbed me by the balls. She did not stop,” said DaSilva who and Chandler have been in a four-year relationship that produced the child.

When asked to give her version of what happened, Chandler said that it had happened “exactly” as Da Silva said but was “a bit edited”.

She said that during the argument she did threaten DaSilva “to leave the house”.

“I told him that several times,” Chandler told the court, adding, “It was like in stages.”

Chandler told the court that she had fallen asleep but could not say at what time, neither could she recall at what time she woke up.

She said that after waking up she asked DaSilva why their son had not been bathed.

“Mr. DaSilva is verbally abusive. So because of that, I told him to leave because he was just being the person he is, saying a lot of mean things. I threatened him with the hot water. I light it and he came and turned it off,” she told the court.

Chandler said that she threw DaSilva’s clothes outside with the intention that when he went to retrieve them she would lock him outside.

She said that she further told DaSilva that she did not want him there that night and that he should come back the following day, Friday.

“But he was being very disrespectful,” Chandler said, adding that she later bathed the child and told DaSilva that he could “stay there and done”.

She said that after some time DaSilva ripped her shirt and he ripped his boxers.

“He put on a next boxer and then he went on the ground. After that, I picked up my phone,” Chandler said, adding that DaSilva told her that she was not going on the phone while he was there.

She said she put down the device and “when he got comfortable again”, she again began to use the phone.

Chandler told the court that she and DaSilva were both scrambling for the phone.

“Then is when I saw a piece of mirror,” she said, adding that she told DaSilva that she didn’t want any argument and wanted him to leave.

She said that DaSilva then took the phone and pelted it on the bed.

“I was just there with the weapon in my hand,” she said, demonstrating to the court how she was standing.

Chandler told the court that she did not intend to cut DaSilva.

She told the court that the day after the incident, DaSilva told her that the only reason he is taking her to court is to get custody of their child.

Chandler told the court that she had miscarried once because DaSilva had struck her in her belly.

At this point, the magistrate stopped the woman, telling her that he was entering a not guilty plea for her.

The court heard that the woman was already on EC$1,500 bail.

However, Burnett said that this was not enough, and increased the bail to EC$3,000, with one surety.

He set Sept. 10 as the date for trial in the matter.