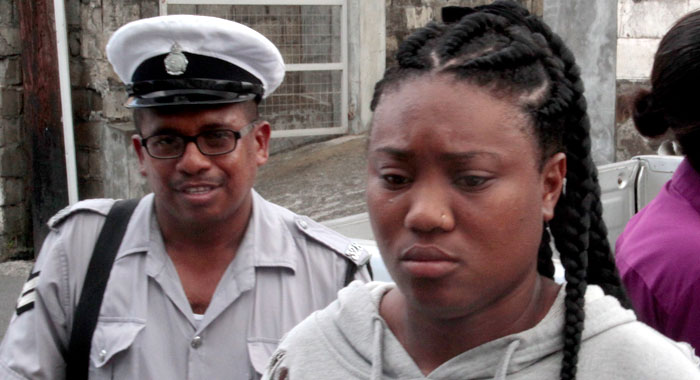 A woman who gave her address as Arnos Vale and Canada learnt on Monday that she could not enter a guilty plea just so she could leave St. Vincent and the Grenadines.

Well, at least not if she is appearing before Senior Magistrate Rickie Burnett.

Timika Mclean is, therefore, slated to reappear at the Kingstown Magistrate’s Court today, Tuesday, for a report and trial on Thursday.

She pleaded not guilty, twice, to a charge that on July 15 at Argyle, she damaged one glass and aluminum door, valued US$1,380, the property of Argyle International Airport, and was reckless as to whether such property would be damaged.

Mclean told the court that she had opened the door “rough” and then the security told her that the door was damaged.

“I didn’t damage the door but the door is damaged. They showed me the damage after. I was angry and frustrated because I wasn’t getting my flight,” Mclean told the court.

She said that she has three young children, one of whom is 7 years old and has seizures.

“Yesterday, they cancelled my flight just like that,” Mclean said.

The magistrate said that based on what Mclean was saying a trial was needed.

“I don’t know if I can be here for a trial,” Mclean said, adding that while she might be able to stay, “My kids need to go home.”

The prosecution, Police Constable Corlene Samuel, told the court that they could have a trial later this week.

At this point, the woman, who did not have a lawyer, asked the court if she could plead guilty.

The magistrate told her that he would not accept a guilty plea out of convenience.

“I will never do that once I am sitting here,” Burnett said. “I will only accept a guilty plea if you are guilty.”

He told the woman he would stand the matter down so that she could seek legal advice.

When the matter resumed, Mclean was being represented by lawyer Grant Connell.

He asked that the charge be put to her again.

Mclean again pleaded not guilty, and the prosecution said they had no objection to her bail.

Connell asked whether the matter could be scheduled for hearing today.

However, Samuel said no, adding that the trial could take place later this week, possibly on Thursday.

Connell responded that he trusts that the prosecution knew of Mclean’s travel plans, adding that he was asking that the matter be heard today, “where a certain course of action would be taken”.

The lawyer said that the case is a manifestation of something that the court has repeatedly noted in which a person is charged and brought before the court but the Crown is not ready to proceed to trial.

The magistrate said that he thinks Thursday for a trial is a reasonable timeframe.

However, Connell said that his client plans to leave St. Vincent on Wednesday.

The magistrate, however, told the lawyer that taking a break so that the woman could seek out a lawyer was something that he had never done before, adding that he did this because he knew the woman was travelling.

At this point, Connell asked for full disclosure by this morning, adding that he would tweak his decision after seeing the evidence the prosecution has against his client.

However, the magistrate ordered that disclosure takes place “prior to trial”, adding, “I don’t expect you to get it on the morning of the trial.”

He also granted Mclean EC$2,000 bail with one surety.