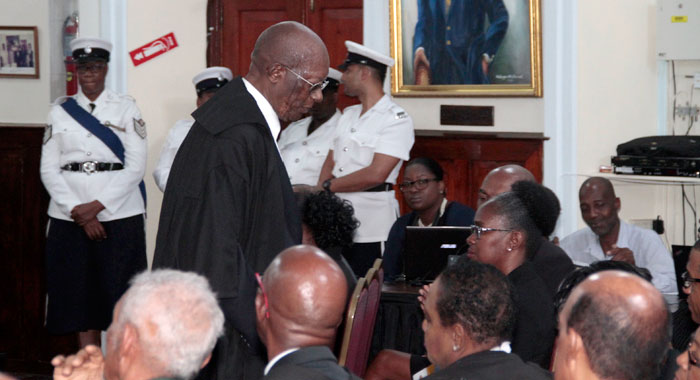 Parnell Campbell, QC, said on Friday that he took it personal when voter rejected proposed changes to the constitution in 2009. He is seen here returning to his seat, after speaking at Friday’s ceremonial sitting, in Kingstown, of the Caribbean Court of Justice. (iWN photo).

The man who led the years-long revision of the St. Vincent and the Grenadines Constitution only to see electors reject the proposed changes in a referendum, says he took the voters decision to heart.

I felt it deeply. I felt personally wronged because I had been the chairman of the Constitutional Reform Commission, lawyer Parnel Campbell, QC, said on Friday at the ceremonial sitting, in Kingstown, of the Caribbean Court of Justice.

In the November 2009 vote, Vincentians overwhelmingly voted against the revised constitution in a referendum that analysts said was a vote on the Ralph Gonsalves Unity Labour Party (ULP) administration.

The Vote No campaign was led by the main opposition New Democratic Party.

However, the Gonsalves government went on to win the general elections in December 2010 by a single seat, having lost four of the seats it held in the previous parliament.

Fridays historic sitting of the CCJ was held to honour the accession of Vincentian jurist, Justice Adrian Saunders to the presidency of the court.

I have been a member of the New Democratic Party; I served as Attorney General and Minister of Justice for eight and a half years. And because of the role that the party played in the rejection of the referendum proposals, I became estranged from my party. Over the years, like a good Christian, I came to forgive them, he said to laughter, adding, Forgive them, Lord, for they know not what they do.

In the presence of your distinguished lordships, I would plead with the Honourable Leader of the Opposition to take to heart the comments of the prime minister and all the comments and implied pleas of those who have spoken to join with the government in bringing St. Vincent and the Grenadines into the appellate jurisdiction of this court in the earliest possible time.

Justice Saunders has one, non-renewable seven-year term. It would be a travesty and indeed, a betrayal, for him to come to the end of his term with his own still having rejected him.

Opposition Leader Godwin Friday, who took up that post in 2016, but has been an MP since 2011, attended, but did not speak at Fridays event.

At the event, Prime Minister Ralph Gonsalves said that he would be willing to bring to the parliament a law to replace the London-based Privy Council with the CCJ as SVGs highest court, if the opposition would support it.

Such a change was among those the electors rejected in 2009.

Gonsalves, however, said that the Court of Appeal has since ruled that a referendum is not necessary for the change.

To make such a change, Parliament must secure the support of two-thirds of its members  an advantage that Gonsalves until the 2010 elections.