Will SVG also reject CCJ with its national at the helm? 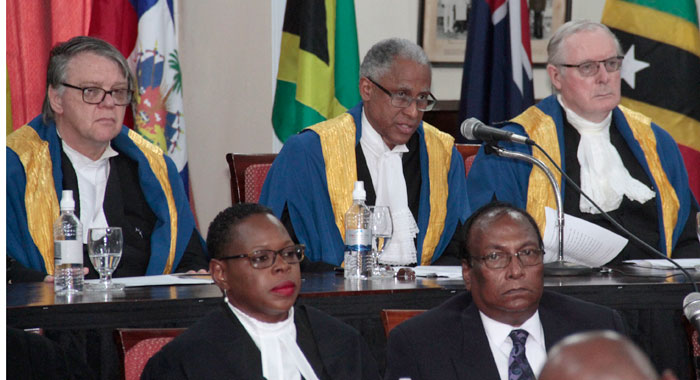 Justice Adrian Saunders speaks at the ceremonial sitting of the Caribbean Court of Justice, of which he is president, in Kingstown, on Friday. (iWN photo)

Vincentian jurist, Justice Adrian Saunders, this month became the third president of the 13-year-old Caribbean Court of Justice, which CARICOM set up with the hope of replacing, among its members, the London-based Privy Council as their highest court.

And, like his predecessor, Justice Saunders come to the presidency of the Trinidad-based regional court, even as the land of his birth is yet to sign on to the appellate jurisdiction.

To mark Justice Saunders ascendancy to the CCJ presidency, the court held a special sitting in Kingstown on Thursday.

Speaking at the event, Queens Counsel Parnell Campbell noted that the three presidents of the court have come from countries yet to sign on to its appellate jurisdiction.

He said that the first president of the CCJ, Justice Michael de la Bastide, of Trinidad and Tobago, where the court is headquartered, came unto his own; his own received him not.

The second president, Honourable Justice Byron of St. Kitts and Nevis came unto his own and his own received him not. Will the own of the third president not receive him? Campbell said.

Vincentians were given a chance to make such a decision in 2009, but rejected among other proposed changes to their Constitution, the opportunity to replace the Privy Council with the CCJ.

Campbell said that Fridays sitting of the CCJ in Kingstown was almost a spiritual occasion in that here we are, honouring not just a son of the soil but a person whom I am privileged to call a friend in the land of his birth on the occasion of the first sitting here of this distinguished institution, the CCJ.

Campbell, a former Minister of Justice, who was chair of St. Vincent and the Grenadines Constitutional Reform Commission, said that in 1974, he embarked on a doctoral dissertation on the topic, The judicial committee of the Privy Council as a West Indian Court of Appeal.

He pursued four years of actual research in the basement of the Privy Council in London, but returned to SVG to join the political aspect of an on-going struggle which had begun in 1969 in the year when he was to write his thesis.

 during the course of my research, I had formulated the firm conviction that the Caribbean had to get its own final appeal court, Campbell said.

This conviction was fortified by my earlier studies at university in political science, which convinced me that a nation cannot properly regard itself as independent if its final judiciary was non-national.

He said he came to develop a healthy respect for the jurisprudence coming from the Privy Council.

But you can admire other peoples judicial work to X extent but there comes a time when one has to sit back and ask oneself Are we really a sovereign people? Can we continue forever to look to court of non-Caribbean people primarily for the adjudication of our  particularly over the years that we have seen the distinguished work done by the CCJ.

The Caribbean should be collectively ashamed, the commonwealth Caribbean, the CARICOM Caribbean, that four out of so many independent countries, after 13 years, have seen it fit to join the appellate jurisdiction while the others mollycoddle.

Campbell said he was delighted to hear Prime Minister Ralph Gonsalves, who also spoke at the event, pledge solemnly that he is willing to receive the CCJ in St. Vincent and the Grenadines as the final appellate court.

I turn and look at my brother, the Honourable Leader of the Opposition, also a barrister, Campbell said of Godwin Friday, who attend the event but was not listed to speak.

2 replies on “Will SVG also reject CCJ with its national at the helm?”