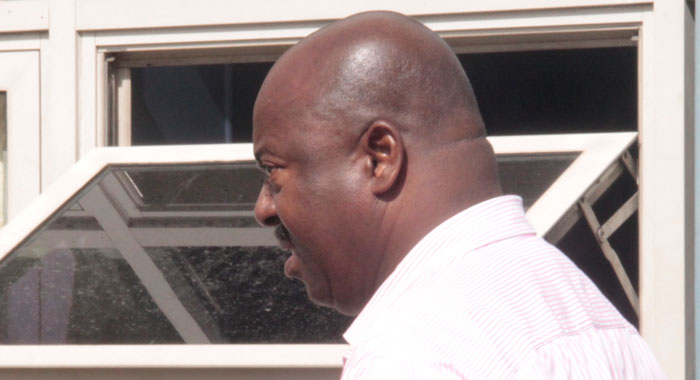 The justice of the peace who witnessed the incident in March that left Community College student Sakaina John with a slit lip and New Montrose woman Chantea James facing a wounding charge, grabbed his gun as the incident escalated.

When James’ trial began at the Kingstown Magistrate’s court on July 13, the Justice of the Peace, Renwick Baynes, of Diamond Estate, said he was in his vehicle about 12:38 p.m. on March 28, 2018 in front of Caribbean Reference Laboratory in Paul’s Avenue, Kingstown.

Baynes told the court that he noticed James “squaring up” with John.

The witness said he had turned down his vehicle window to tell them to behave themselves, when he observed that they began to exchange “physical contact”.

“I would call it blows,” Baynes said.

“I grabbed my licensed firearm and I came out the vehicle to part the fight,” the justice of the peace said.

“On approaching the two young ladies, the defendant had a knife in her hand and was swinging it at the other young lady,” Baynes further told the court.

By the time he reached the two women, John was already in blood, having already received a few cuts, Baynes told the court.

He said he pushed himself between the young women and was able to separate them. He then held on to James and also observed that John’s lip was slit. She also had a cut below her right eye, with what appeared to be blood flowing from it, he told the court.

Baynes said that the “young lady” dropped the knife and he asked someone at the laboratory to call the police, at which time a plain-clothes officer came to the scene, and he later learned that the officer was Corporal James.

During cross examination, Baynes told the court that when he first saw the two women, they were between 12 and 24 inches apart, but there was no physical object between them.

He further said that he did not see a child in the defendant’s hand.

The witness told the court that the two women were hitting each other, but he could not say who had initiated the physical confrontation.

He said that when he held on to James, she told John, “Don’t mek yo’ blood spout on me because yo’ have AIDS.”

Baynes told the court that James told him that John had been threatening her so she came prepared for the virtual complainant.

Apart from Baynes, the virtual complainant, as well as her friend, Jézell Prescott, who witnessed the incident, along with Detective Corporal Dwight James, and Detective Constable Sheffique Joseph, the investigating officer testified.

The prosecution had announced that Joseph was available for cross-examination, when defence counsel, Carlos James, complained that he had just learnt on the day of the trial about a caution statement, although the court had ordered disclosure, on July 2, on which day the prosecution had done so.

In her evidence, John said that she had refused to talk to James when she (James) and friends visited John’s school and attempted a conversation with her one week before the incident in Kingstown.

She said that all of her confrontations with James, which also included some online interactions, including John posting online a “scratched out” topless photo of James, were in relation to John’s boyfriend, which is James’ ex-boyfriend.

John told the court that when she saw James in Kingstown on the date of the incident, James was mumbling while staring at her, so she asked the defendant what she was saying.

The virtual complainant said she told James not to molest here whenever they see each other.

John said that James then attacked her with the knife.