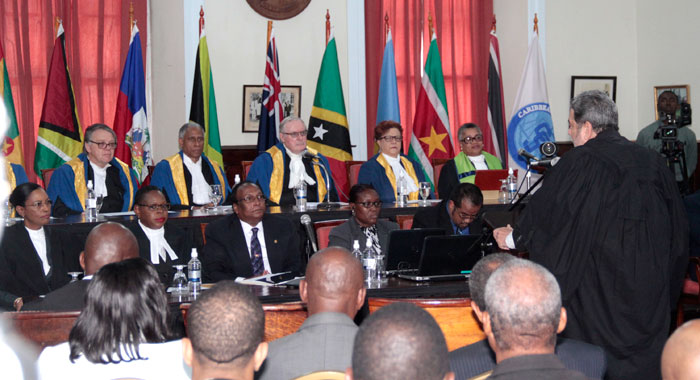 Addressing the CCJ in Kingstown, on Friday, Prime Minister Ralph Gonsalves said he doesn’t know “any politician who is foolish enough” to try to intervene in the court. (iWN photo)

Prime Minister Ralph Gonsalves says he is willing to bring to Parliament a law to replace the London-based Privy Council with the Caribbean Court of Justice (CCJ) as St. Vincent and the Grenadines highest court.

Gonsalves said Friday that he is willing to do this although voters rejected the CCJ, among other proposed changes to the nations constitution, in a referendum a decade ago.

He made the statement at the same chambers where, on June 28, during a meeting of Parliament, he cited voters referendum decision in defence of his governments continued refusal to pass integrity legislation, which had been a main plank of the campaign that brought his government to office in March 2001.

The prime minister told Fridays special sitting of the CCJ in Kingstown that he would bring such a law only if the parliamentary opposition commits to support it.

We have to answer the political question why do we do it alone in the house, we having gone to a referendum. Well, we can simply say that we are all at one on it and that the referendum didnt turn on that question.

And if both of us say so, my lord, we have nothing to lose Lets fight about other things next time around, not this one. I am making this plea. Let us strive for the seemingly impossible Let us show favour to our son, Justice Saunders, and the gods will smile upon us

He was speaking at the first sitting in SVG of the 13-year-old Trinidad-based court.

The sitting was held to mark the accession of Vincentian jurist, Justice Adrian Saunders as the courts third president.

Barbados, Belize, Dominica and Guyana have replaced the Privy Council with the CCJ as their court of last resort for criminal and civil matters.

I think the greatest tribute we can pay to Justice Saunders is for St. Vincent and the Grenadines to become the next member of the CCJ in its final appellate jurisdiction, Gonsalves, a lawyer, said to applause.

We tried our hand at it in a referendum in November 2009. The people spoke and they rejected the constitutional changes. There were many changes so I cant be sure that the people didnt want to have the CCJ. Perhaps they preferred having her majesty to continue as head of state, rather than a home-grown president — because there were many, many changes.

The prime minister, who is also Minister of Justice and Legal Affairs, said that his government had always been under the impression, until the Attorney Generals Reference advisory opinion from the Court of Appeal, in St. Lucia, that SVG had to go to a referendum to replace the Privy Council with the CCJ.

He said that to make such a change, his government would need two-thirds support in the Parliament.

The government doesnt have a two-third majority. But, if the opposition — and the Leader of the opposition is here; he is not speaking today, he is not on the programme and I dont want to ambush him. I have never done that. At least, not intentionally, that if they are of the mind to join the government in passing a constitutional amendment to have the CCJ, I will find time on the parliamentary agenda to do it very, very swiftly. So I want to give that assurance to all those are gathered here and to the people of St. Vincent and the Grenadines.

He said his experience has been that those who fear the loss of power tend to lose it swiftly.

So I am not fearful of going to the Parliament, if the opposition — we can have a free vote, and all of us, see whether we have a majority.

Gonsalves told the judges at the bench during the ceremonial sitting that he cant wrap his head around the idea that Caribbean people can pass laws, interpret them up to the level of the court of appeal, but we need some other persons from another civilisation, presumably better?

Well, where is that presumption? If they are better, I shouldnt be the prime minister. We should have a governor general running St. Vincent and the Grenadines. For my part, I have no desire to linger, to loiter on colonial premises beyond closing time.

Gonsalves said that the CCJ is the only supranational institution that can command obedience within the architecture of the CARICOM institutions.

He said that great care was taken to ensure that the financing of the court is independent of politicians and that a trust fund was set up and is independently managed.

Of course, the heads of governments receive the reports, he said, adding that there are other courts in the western hemisphere and Europe, for example the Organisation of Eastern Caribbean States Supreme Court, where they depend on individual funding every year.

He also responded to fears of political interference in a regional court such as the CCJ.

This idea that politicians would take up the telephone and call a judge is absolute rubbish. First of all, I dont know any politician who is foolish enough to do that, but no judge would listen to them.

Gonsalves, who came to office in March 2001, said he hasnt spoken to a judge or magistrate about any decision, adding that as far as he is aware, none of his predecessors in SVG has done so.

On the June 28 meeting of the national assembly, Member of Parliament for East Kingstown, Arnhim Eustace, asked Gonsalves if his government was contemplating the establishment of integrity legislation as in the case of so many other countries to monitor the assets and liabilities of members of parliament.

As had often been the case, Gonsalves took advantage of the opportunity to bash the main opposition New Democratic Party, which Eustace headed from October 2000 to November 2017, over its 2009 campaign against proposed changes to the nations constitution.

When the proposed changes were put to a vote in a referendum, they were overwhelmingly rejected in a vote that political observers say was actually a referendum of the Gonsalves government, one year before he called general elections.