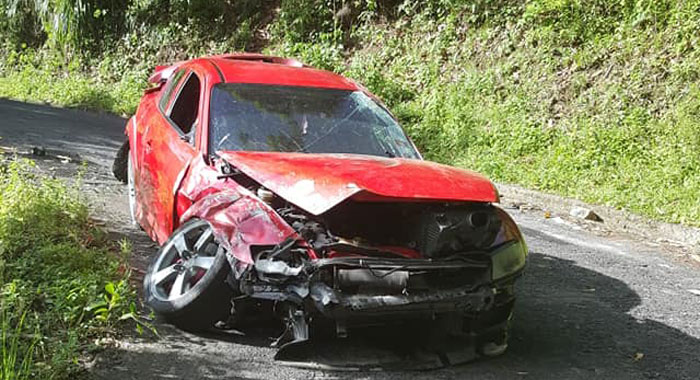 The car after the crash. (Photo: Roland “Patel” Matthews/Facebook)

A driver from Petit Bordel escaped the Coulls Hill “death trap” Saturday night when he was able to jump from his vehicle before it plunged over an embankment that has claimed four lives since 2013.

“Death trap” is the name that Member of Parliament for North Leeward, Roland “Patel” Matthews, has given to the section of the road in Coulls Hill, where a landslide damaged a part of a retaining wall.

No repairs have been done to the road which has claimed four lives in two accidents, including three members of a Spring Village family, even after Minister of Works, Senator Julian Francis told Parliament in April 2017 that temporary repairs will be done to the road.

iWitness News was unsuccessful in repeated attempts to reach via cell phone this week Mitchell Sam, the man who survived Saturday.

However, Matthews said that Mitchell did not have any obvious injuries when he spoke to him earlier this week.

The MP said that Mitchell, his fellow villager, told him that he was travelling north Saturday night when he was blinded by the headlights of an oncoming vehicle.

Mitchell felt his vehicle, a car, begin to slip over the embankment on the left side of the road and was able to escape before it plunged over the cliff, which is hundreds of feet high.

Matthews has been lobbying since 2013 for the government to take steps to repair the damaged road.

He has asked questions in Parliament about the government’s plan for repair and their timelines.

The North Leeward representative noted that Minister of Works, Sen. Julian Francis has told Parliament that the repair of the road is a very involved project, with some of the alternative routes proposed being prohibitively expensive.

But Matthews repeated to iWitness News Thursday night his suggestion of a temporary solution that could prevent vehicles from going over the embankment.

“A temporary thing that I believe could work — and a lot of people are of the same opinion –is to have the top of the wall replaced, because that is what was removed [by the landslide].”

Matthews said that a close examination of the area shows that the foundation of the wall, right to the level of the road is still intact.

“It is just the top of the road, the foot and a half that comes up above [the level of the road] that is what was removed by the flood that came in 2013.”

He said that he knows it will take some time for “that to be properly rerouted and fixed.

“So I think the best thing to do now is to have a fix that people can be satisfied with. Because, the entire length of that wall, the problem that it has is that the top of the wall broke off.”

Mathews noted that during the repair of the Nelson Mandela Highway (previously the South Leeward Highway), in some areas, the retaining wall was raised in the same fashion that he suggests be done in Coulls Hill.

“And I think that if that is done, people would feel much safer because they know that there is something there that would keep a car or a minibus from going over if they are having problems coming up that hill.”

He said he refers to the area as a death trap because four lives have been lost there since the road was compromised almost five years ago.

“And the fact that this car went over there again could have been another fatality.

The MP said that a bus, loaded with students, almost slipped over the road last year.

He said that had the bus plunged over the embankment, the tragedy at Rock Gutter, North Windward that claimed the lives of seven students would have paled in comparison.

Matthews noted that there are no signs in the area to warn of the danger.

“I remember in Parliament, … I asked the minister if there is any possibility of erecting some signage to let people know what is happening and he gave me the assurance that it would be done and it was never done. And the problem still remains.”

Matthews also told iWitness News that because of the geography of the area, it is very easy for someone who is driving along the damaged road for the first time to not see the danger.

“When you get down to that area, you are looking over to Troumaca, and it is on the left hand side. So if you attention is taken up with Troumaca, for example, you are looking at the terrain of the leeward coast and you are not a good driver, one slip up and that could be it for you.

“Because I understand that in the first case that is what happened. It was just after the flood and they were looking at where the damage was done and when they were coming down, they were driving slowly, pointing across over Troumaca to where some landslides took place and without realising they were close to the embankment and they went over.

“So that is why I refer to it as a death trap. Because it is exposed and it is dangerous, and it needs to be given some serious attention. And that is almost five years now. December of this year will make it five years and nothing was done. Absolutely nothing. … Just talk, talk and more talk,” Matthews said.