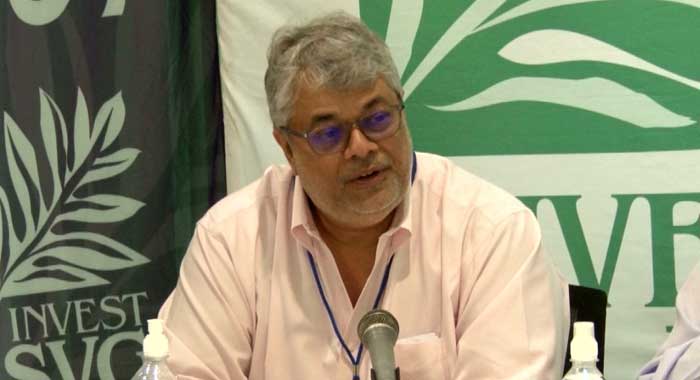 This was highlighted on Saturday at the airport during the signing of a memorandum of understanding (MOU) with Kayan Aviation Holdings for the construction of a fixed-base operation (FBO) and a commercially important people (CIP) lounge at the airport.

Hadley Bourne thanked Annette Mark, CEO of Invest SVG, for the work done in pushing and promoting the project and is looking forward to AIA now having the best FBO facility in the region.

Bourne said he was holding Uday Nayak of Kayan Aviation Holdings to having the CIP up and running by the winter season as some of the major airline players, especially American Airlines, which would begin direct flights to the island in December, have clientele who are quite interested in this type of service.

He said he was glad that investor confidence had returned to AIA.

“There was a lot of uncertainties surrounding the airport in its initial stages and having foreign investors show that there is viability in AIA really shows that we are doing the right thing just 18 months into operations and I am looking forward to the partnership, a long-term partnership.”

Bourne added that the CIP would be a plus to the facility and stressed that one of the things they want to drive at Argyle is although it may be small in terms of size compared to some of its neighbours, providing quality service is a priority.

Meanwhile, Mark, who was instrumental in making the investment possible, said Nayak is no stranger to the Caribbean as he owns and operates an FBO in St. Kitts. He also owns Kayan Aviation Holdings, a leasing company for planes.

Mark said the FBO will change the landscape further for St. Vincent and the Grenadines and AIA and she looks forward to having it here.

She added that it would be quite an investment and will also provide job opportunities for Vincentians.

The MOU allows for Nayak and AIA to get all the legal issues and plans in place before breaking ground at the end of the year.

Bourne and Nayak signed the MOU.

Before signing the MOU, Nayak said that when he visited St. Vincent and the Grenadines he was overwhelmed by its beauty.

He said that the FBO owned by his company in St. Kitts is the most beautiful FBO in the Caribbean.

The architect contracted on the project has already visited and thrown some ideas out and Nayak said he is Looking forward to getting the project to the next step before the construction mode.

The investment in the lounge is valued at approximately US$7 million.