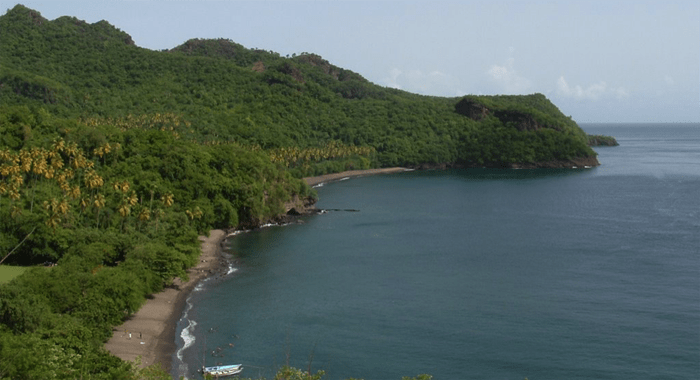 Invest SVG, a publically-owned company (formerly called DEVCO) reporting directly to the Office of the Prime Minister of St. Vincent and the Grenadines (SVG) just announced that “… government had already signed two Memoranda of Understanding (MoUs) that will see major projects, as it relates to hotel and tourism development, begin here soon” (The Vincentian newspaper, March 24, 2016, p. 6).”

“The focus is on two major projects: the development of 250 acres of land at Mt Wynne/Peter’s Hope for which a MoU was signed with Karisma Hotels and Resorts, that will see the construction of three five star, all inclusive gourmet resorts; and the development of a new city at Arnos Vale, once E.T. Joshua Airport has been decommissioned.”

Starting with the second MOU, Invest SVG’s top official, Executive Director Bernadette Ambrose-Brown, claimed that the “… Trinidadian franchise, MovieTowne, has already signed a MoU that will see the construction of an entertainment facility that includes a Cineplex, boutique hotel, shopping plaza and an amusement park.”

“It is anticipated that the shopping plaza will attract some international brands such as Burger King, Popeye’s [a fried chicken chain] and Haagen-Daz [a gourmet ice cream franchise].”

From my perspective, this is all wishful thinking.

But first, what is a MoU? For the purposes here, a memorandum of understanding is an agreement between two parties indicating an intended common line of action, in this case an intention to pursue (on the part of an investor) and endorse (on the part of a government) a particular business venture. It is often used in cases where one or both parties are not ready to make a legally-binding and enforceable commitment to proceed, in this case to develop a new city at Arnos Vale. In other words, a MoU is simply a more formal alternative to a casual gentlemen’s agreement based on a head nod or handshake.

Second, what is MovieTowne? It is a franchise wholly owned, developed, and operated by Trinidadian businessmen. The company has achieved an outstanding growth rate since it opened its doors in 2002 and is now the premier cinema and entertainment complex in Trinidad and Tobago (T/T) with three locations and 22 screens nationwide.

The flagship enterprise at MovieTowne Port-of-Spain is a one-stop entertainment destination for dining, liming, shopping, and live entertainment. The multi-faceted complex facility is home to a Mediterranean style courtyard mall, with over 60 retail shops and restaurants, fiesta plaza, outdoor dining and live entertainment area, banquet and conference centre, and amusement park featuring rides and outdoor activities for children and families.

A new franchise in San Fernando is nearing completion as is one in Guyana, “… the first gateway to taking the MovieTowne brand beyond our shores to the rest of the Caribbean region”.

There is no mention on the website of any MoU or even an interest in expanding to SVG.

Still, how realistic is it to expect a MovieTowne at Arnos Vale, SVG?

The demography and wealth of T/T and the prospects of expansion elsewhere in the region suggest the chances that MovieTowne would ever come to one of the poorer and less populated countries in the Caribbean are very slim.

T/T has a population of 1.2 million people and a per capita Gross Domestic Product (GDP) of US$32,800 (putting it in the category of “more economically developed countries”); SVG has less than one-tenth the population (110,000 people) and a per capita GDP of US$11,000, fully one-third the T/T level.

We simply do not have the population size or wealth level to support a MovieTowne franchise. (If this were not so, T/T would now have at least 10 of these franchises – instead of the three that are fully operational — serving different parts of that large country.) Nor is the Arnos Vale area an attractive venue for such an enterprise even if it were potentially viable.

Ken Boyea and the Phantom City at Arnos Vale

A tourist hotel at Arnos Vale would attract few international holiday visitors, a pricey though elegant Cineplex would draw few customers while possibly bankrupting our the sole existing Kingstown movie house, and the products available at an upscale shopping plaza would be beyond the reach of most Vincentians.

If the struggling shops at our current cruise ship terminal in Kingstown and the two habitually vacant elite enclosed shopping malls at Rodney Bay in St. Lucia are examples, a MovieTown at Arnos Vale would quickly resemble a ghost town. Still, with so little to do in SVG, an amusement park sounds like a good idea, at least if there is sufficient patronage to make it economically feasible.

But all this is idle conjecture because if MovieTowne were to expand beyond Guyana (the birthplace of three of its owners and directors which may account for investing in a dirt poor albeit rapidly growing country) to other Caribbean countries, chances of its success would be much higher in richer and more populous destinations like Barbados or The Bahamas, nations that already attract hordes of tourists and that would be more than willing to offer the same tax and other concessions that we would be able to put on the table.

As for the prospects of the implementation of the terms of the second MoU for developing the Mt. Wynne/Peter’s Hope area with “three five-star, all inclusive gourmet resorts,” presumably oriented to the upscale international tourist market, I offer all the hospitality limitations described in 25 essays on the development of SVG mainland tourism.

St. Vincent’s place in the world of travel

Still, it is useful to ask whether Karisma Hotels and Resorts, a fairly new hotel chain founded in 2000 as a hotel management and marketing company based in the Dominican Republic, is likely to act on its MoU.

In recent years, Karisma has branched out into building its own properties under different brand names. Late last year, the company announced plans:

“…to invest more than US$900 million in projects that could include nine hotels in the country [of Jamaica]…. The company isn’t new to Jamaica, having opened its first hotel, Azul Sensatori Jamaica in Negril last year, with construction already underway for a neighboring hotel, Azul Seven, a 149-rooom, $US 45 million project in Jamaica.

The company has now acquired 228 acres on the north coast of St Ann, with plans for nine hotels comprising 4,000 new rooms over the next decade”.

But apart from the Dominican Republic and Jamaica, Karisma has no other properties in the Caribbean. So how likely is it that this company will ever build “three five star, all inclusive gourmet resorts” at Mt. Wynne/Peter’s Hope even if it were granted the same 20-year tax-free exemption given the troubled Buccament Bay Hotel and Resort, a project Karisma executives must be closely watching?

The most telling evidence that the MoU will bear no fruit is that Karisma has made no announcement of having the slightest interest in building even a single resort in SVG.

The same holds true for every hotel chain, nameless “group of Canadian investors,” and airline said to be “interested” in serving our hospitality sector. Compare this to the way we are now being bombarded by enthusiastic announcements from hotel chains and airline companies eager to cash in on the predicted explosion in the Cuban hospitality sector, even as the government of Cuba has kept fairly tight-lipped about these developments.

The poor people at Invest SVG, as highly paid and underworked as they may be, have a heavy burden trying to peddle our sow’s ear of a mainland hospitality industry as if it were a silk purse. We have been desperately trying to off-load Mt. Wynne/Peter’s Hope for at least 35 years to no avail. Given all our mainland tourism limitations, especially the absence of white sand beaches, we would still be doing so 35 years from now. (Conversely, if the Mt. Wynne/Peter’s Hope beaches consisted of silky-soft white sand, hotels and resorts would have been built there decades ago, despite the absence of an international airport).

Finally, if two tentative MoUs and an unfinished resort at Buccament Bay is all we have to show for our efforts to build a thriving mainland tourist industry nearly 11 years after Dr. Ralph Gonsalves’ “famous speech” on August 8, 2005 announcing the construction of Argyle International Airport (AIA), we are surely on the road to perdition.

Equally important, even if both MoUs are followed up on, the net result would still be devastating. According to Glen Beache, CEO of the SVG Tourism Authority:

“Limitations on room stock will keep us from overgrowing, and those limitations will not disappear. This is a multi-island destination and they are small islands – there are simply not large plots of coastal land available for mega-development. On the largest island, St. Vincent, we have 463 acres put aside for hotel development at Mt. Wynne, on the Leeward coast near Layou – after that there’s no other land available”.

Applied to Karisma, this means that if the chain actually built “three five star, all inclusive gourmet resorts” totaling 600 rooms at Mt. Wynne/Peter’s Hope, this would come nowhere close to justifying the costs of constructing and operating AIA, something an airport economic feasibility study would surely have shown.

This is the 26th in a series of essays on the folly of the proposed Argyle International Airport.