Jail for man shot during burglary 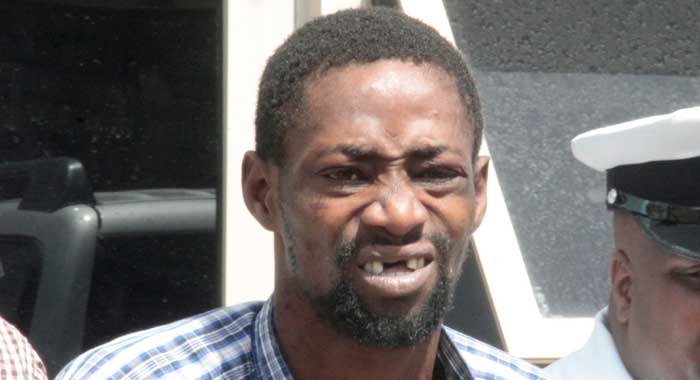 For the second time in a year, Alonzo Bailey has been jailed for a burglary-related crime. (iWN file photo)

A 31-year-old Green Hill man who was shot by a businessman he attacked during a burglary will spend the next nine months in prison.

On Monday, at the Kingstown Magistrate’s Court, Alonzo Bailey pleaded guilty to a charge that between June 11 and 12, 2018, he damaged a glass window, value EC$480, and one wooden door, value EC$386, the property of Earl Abraham of New Montrose.

He further pleaded guilty to a charge that between the same dates, also at Kingstown, with intent to commit the offence of burglary, he did an act which was more than merely preparatory to the commission of the offence.

The court heard that Abraham is the owner of City Lyfe Bar, located on Higginson and Middle Street Kingstown.

He has CCTV system installed at the place of business and can monitor it remotely.

About 8:20 a.m. on June 12, Abraham checked the CCTV footage and saw Bailey breaking a glass window at the business place.

On arrival at the premises, Abraham made checks and encountered the defendant in a dark area of the business place.

Bailey rushed at the business owner, who drew his licensed firearm and shot him in the right foot.

The police were summoned and Bailey was met on the ground with blood coming from his leg. He was taken to hospital and was subsequently charged.

He used crutches when he appeared in court on Monday before Senior Magistrate Rickie Burnett.

As the trial moved to the sentencing phase, the magistrate asked for the man’s record. However, the prosecution told the court that while Bailey has convictions, his record was not before the court.

Burnett said that a defendant’s record is an important part of the sentencing phase, adding that it is one of the things that the court considers in determining the appropriate sentence.

He asked the prosecution what would he tell the Court of Appeal, if Bailey appeals the sentence.

Lawyer Ronald “Ronnie” Marks, who was at the bar table but was not involved in the case, rose and told the court that in such circumstances, the court has two choices: adjourn the sentencing until record is produced or sentence Bailey as if he has no record.

The magistrate then said that he follows the court of appeal “to a tee”.

“They are the higher court, so I am guided by them.”

The magistrate had earlier stood the matter down so that Abraham could be summoned.

He told the businessman that he thinks that when matters are disposed of, the aggrieved person should also be in court to see how the court treats with the matters.

Burnett decided to stand the matter down a second time so that Bailey’s record could be brought to court.

When the hearing resumed, Burnett noted the number of convictions that Bailey has.

“You started at a young age; a juvenile,” Burnett said, but noted that some of Bailey’s convictions are spent.

“At a young age, you got six strokes as a little boy but that didn’t help you. What did that do for you?,” the magistrate further said.

Bailey told the court that he had attended the C.W. Prescott Primary School.

His record shows that he received a suspended sentence and was also bonded in 2014 and was also reprimanded and discharged that year.

He has also served time for breaching a court order and was convicted in 2016 for attempted burglary and theft of a ewe goat.

Bailey told the court that on the night that he committed the offence in June, he had had an argument with his father.

He said he left home, went to a bar and got intoxicated and then is when he committed the crimes.

But the magistrate noted that Bailey has convictions for similar offences, and the defendant blamed them on his alcohol problem.

“Did you get any rum to drink in prison?” he asked he defendant, who replied no.

“Then prison seems to be the right place for you.”

But Bailey told the court that he has children to take care of.

“Well, you did six months already and they survived,” the magistrate retorted.

He added: “You all have to stop this thing — breaking into people’s businesses and houses. I get the police report and it is a daily thing. When people are caught, I have to be rough on you. I know you suffered or are still suffering with that gunshot. But I have no sympathy for you. Keep out of the man’s place and you’d be fine,” the magistrate said.

In her submission on sentencing, prosecutor Police Constable Corlene Samuel noted the offences for which Bailey had been convicted.

She further observed that he had been given chances in the past, noting that he had received suspended sentences and bonds.

Reform is out of the question, the prosecutor said.

She noted that Abraham is running a business and he, too, has bills to pay.

Speaking of the defendant, Samuel said, “Yes, he was shot, but I think that the only place is a prison sentence.”

The magistrate asked Bailey: “If I don’t send you to prison, what should I do with you?”

“I change my life,” Bailey said, triggering a rebuke from the magistrate, who said, “Stop that!”

He asked Bailey if he would be able to pay a fine and he said no.

“You don’t even have money to compensate the man, so the only thing I can do is send you to jail.

The magistrate sentenced Bailey to nine- and six-month jail terms, which will run concurrently.

“Now, before you go, once I am alive and I am around, I will be here. When you come out of prison, I don’t want to see you here,” the magistrate said.

7 replies on “Jail for man shot during burglary”