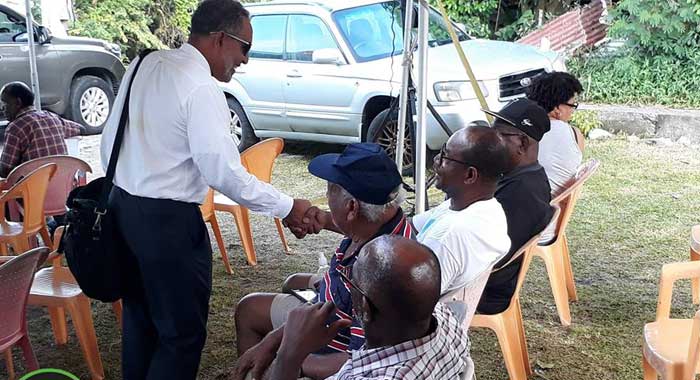 The main opposition New Democratic Party (NDP) has hailed the arrowroot Forum held in Owia on Sunday a success.

“We believe the arrowroot industry has a bright future; the people of Owia told us that they believe that too.  With careful, sensible planning and actions together we can make it work for farmers, the communities of North Windward and the country,” Opposition Leader Godwin Friday, told a press conference in Kingstown on Sunday.

Friday, however, said that what emerged at the arrowroot forum was “a tale of neglect and incompetence on the part of the government in the way in which it has handled the arrowroot industry over the years.

“Farmers complained about the lack of access to credit or other money to plant and care for their crops.  This is made worse, they told us, by the chronic lateness of payment for the arrowroot they sell to the government-owned factory.  The volume of production is down,” Friday said.

He said that Allison Balcombe, one of the largest arrowroot farmers, reminisced about the years when his family’s arrowroot plantations produced one million pounds of arrowroot whereas presently he sells only about 20,000 pounds to the factory, and often has to wait a long time for payment.

“Other problems noted were: a lack of extension services from the Ministry of Agriculture; and spoilage of the rhizomes after delivery to the factory.  The farmers and others also said that the arrowroot factory should not be moved from Owia to Orange Hill, largely because of a lack of sufficient water in Orange Hill for the processing of the crop. Any plan to do that should therefore be scrapped,” Friday said.

He said that the NDP will continue to study the industry and to remain in close dialogue with the producers.

“What I want the arrowroot farmers and the people of North Windward to know is this:  the NDP is committed to getting the arrowroot industry back on its feet and to making it profitable for the farmers; we will keep the factory in Owia, because that is what you, the farmers, say makes most sense; we will empower the farmers in the industry by making them an essential part of the planning and decision-making in the industry,” Friday said.

He said that the NDP has given its commitment to the people of St. Vincent and the Grenadines “to come to them to discuss problems facing the country and to hear from them about solutions that can be put in place to address those problems”.

He said the party has been doing this through town hall meetings in different parts of the country and by going to meet the people in their homes in what the party calls walkabouts and by public meetings.

“We believe this approach is critically important, as it allows us in the leadership of the NDP to obtain timely and practical information from people who have first-hand knowledge of the issues being addressed.

“We believe also that this approach is important because it empowers ordinary people in addressing major problems in their communities or industries.  This approach is profoundly democratic and has the potential to transform lives, communities and ultimately our country.

Short addresses were also made by selected arrowroot farmers and were followed by open discussion in which farmers and other members of the community spoke about the problems in and prospects for the arrowroot industry.