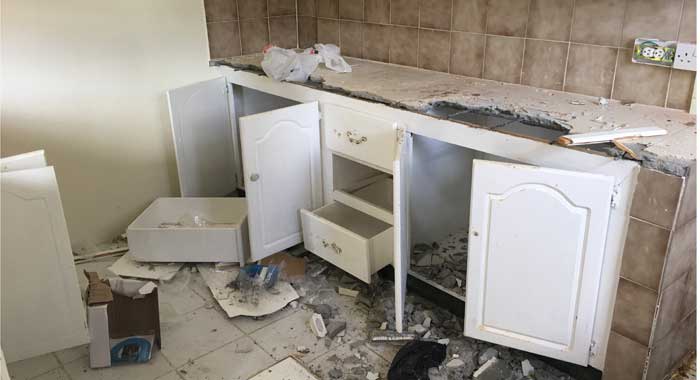 The managers met extensive damage to the apartment after the tenant left. (iWN photo)

The managers of an apartment complex in Frenches, Kingstown are trying to understand what went on there on the night of July 24, when police failed to respond to their report that the sounds of pounding and glass being smashed were heard coming from inside.

Marlon Gibson, who, along with his wife, Cordelia, co-manages S.C. Apartments, told iWitness News that they stood outside the apartment around midnight listening to the sound of destruction and what appeared to be their tenant cursing.

He said he decided to take the matter to the media because the police are yet to arrest anyone after failing to respond twice to their reports that a crime may have been in progress at the apartment.

After leasing the apartment to Jillian Charles for just two months, the Gibsons are faced with a repair bill of between EC$8,000 and EC$10,000 and the prospect that the apartment could be unavailable for let for up to two months.

“The counter top has been destroyed,” Gibson told iWitness News at the apartment on Thursday as he itemised the damage to the two-bedroom apartment that rented for EC$900 per month.

He pointed out that because of the damage, one can see through the top of the cupboard and into the storage area.

At the apartment, the Gibsons have also met damage to the glass doors — which have been broken — of the cupboard for storing wares. Further damage in the kitchen of the apartment includes a smashed counter-top and wall tiles.

There are also broken light fixtures and several hammer prints on the concrete wall in the living room; the closet doors have been smashed, and the cover of the ceramic toilet set broken.

They believe that all this damage was done to the apartment as they stood outside on the night that the police did not respond after their visit to the Criminal Investigations Department in downtown Kingstown, about a quarter mile away.

“This damage was not here before she entered the apartment,” Mr. Gibson told iWitness News at the apartment on Thursday, referring to his last client, Jillian Charles.

“We have a clause in our contract that says when you sign the contract you are saying that we handed you a good product and you are responsible for all of the cupboards and everything that is in the apartment.”

In the interview, which took place in the presence of his wife, Mr. Gibson said that when they leased the apartment to Charles, she paid the EC$1,000 deposit, as agreed, but failed to pay for the first month’s rent at the beginning of July.

He said that when he went to the apartment on July 3 to collect the rent, she told him that she did not have all the funds and that she wanted to vacate the premises on July 11.

Mr. Gibson said he told the tenant that was not a problem and that she could stay until July 15.

“After that, she was still here. We tried calling, we tried messaging. No response,” Mr. Gibson said.

He said that on July 24, he got a call from another of the property’s tenants saying there was “a lot of pounding, cursing, glass breaking downstairs and we need to come. This was about minutes to 12 at night.”

Mr. Gibson said his wife told him that they should pass at the CID in Kingstown before going to the apartment because they didn’t know what they would encounter there.

“We passed, we tried to get an officer to come; we were unsuccessful. Basically, we were told that if they went up and the tenant didn’t open the door, there was really nothing they could do and given the time.

“My wife told them crime happens anytime, so, regardless of the time we would love your presence there once we go up there because we were not sure what was happening in the apartment. But, we were unsuccessful.

“We came up anyway, but given what we were hearing in the apartment, we stood outside, along with one of the other tenants and we decided that we are not going in,” Mr. Gibson told iWitness News.

He said that while standing outside the apartment that night, they recorded all the cursing that was coming from inside.

“The voice was that of the tenant inside, and given the last meeting I had with the tenant, I decided that we are not going in there. It was rather aggressive and a lot of cursing and stuff and all we wanted to know was, ‘When you are leaving the apartment?’”

Mr. Gibson told iWitness News that one of the terms of the lease was that the tenant would give one month’s notice before vacating an apartment.

He said that when Charles told him on July 3 that she wanted to vacate the apartment, she had already owed one month’s rent, EC$900.

The EC$1,000 deposit that a client makes, is used to settle any outstanding bills, Mr. Gibson said, adding that the remaining fund is then returned to the tenant.

He said that Charles did not pay any of the utilities during her two-month stint as a tenant.

Mr. Gibson told iWitness News he has no idea why Charles became hostile towards him after he and his wife had failed over several days to reach her by telephone.

He said that one day, he happened to have been on an upper floor of the apartment complex, attending to another client when he saw Charles arrive at the apartment.

Mr. Gibson said he decided to go downstairs to talk to her, but, since he was alone, he also decided to record the conversation on his mobile phone.

The woman in the video offered no explanation regarding why she had not paid the rent for June.

She told Mr. Gibson that he had told her on the phone that if she did not leave the apartment that he would take her to court.

She denied saying that she would leave the apartment on July 11 and suddenly became very angry and swore at Mr. Gibson, accusing him of putting words in his mouth

Mr. Gibson said he got a call sometime after 7 a.m. saying that there was a truck in the yard at the apartment and the tenant was leaving.

“When we came, we met her — I have a video of that as well. I said, ‘Good day, Miss Charles, you destroyed my apartment. She did not look at us, she did not say anything,” Mr. Gibson said.

“The three guys were here with a truck jogeing (carrying) her stuff out. One of the guys was asking me if is man and woman fighting went on in here. I said no.”

Mr Gibson said he left and went back to the CID, where he met the same officer from the previous night and told him about the damage that was done to the apartment and that it could have been prevented.

“And I was hoping that they would have come quickly to catch the lady in the yard and the truck, but it took some time for them to come, so by the time they came, the lady was gone, the truck was gone.”

Mr. Gibson said that the detectives who responded took photographs of the damage that was done at the apartment.

He told iWitness News he does not know what caused the relationship with the tenant to go downhill.

“I don’t know what caused it but when I heard that it had allegedly happened before … involving the same person, I thought why didn’t somebody come to say, iWitness News or the public before…”

He said that when the tenant approached them about the lease, she was “very nice, … a very mannerly lady” and paid her deposit up front and they had no problems during the first of her two-month stay at the apartment.

Now the Gibsons have been left with a huge bill that they believe could have been reduced had the police responded sooner.

“It is an apartment that we can’t rent like this… It is going to put us out for about two months.”

Police say they are working on it, and might bring charges against someone soon.

“We did our best to keep it out of the media because we are not ones to run to the media, but, … we don’t want anybody to have to deal with this again,” Mr. Gibson said.

When iWitness News tried to contact Charles via a number supplied by Gibson, the woman person who answered the phone said that while it belonged to Charles, she had forgotten it at a bar and might not retrieve it until Friday afternoon.

The number then contacted iWitness News via WhatsApp, saying “Hello”.

However, by the time we responded several minutes later, the number seemed to have blocked us from communicating with it via that platform.

9 replies on “Apartment smashed after police failed to respond”