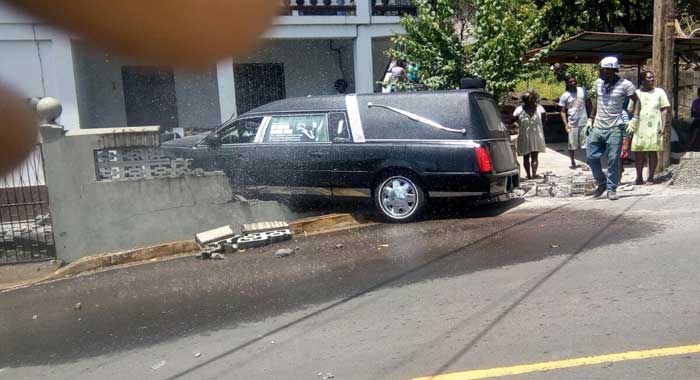 The hearse crashed into this property in Layou.

The company that owns the hearse that crashed in Layou on Wednesday on the way to a funeral says they, along with the police, are investigating the cause.

“Well, the first thing is that the hearse was considered to be in pretty good condition because it has just been serviced and things like that. So the most I can say at this point is that we, along with the police, are investigating the real cause of the crash. That’s basically what I can say at this time,” Asfo Stephens, manager of Joseph Da Silva Sr. Memorial Funeral Home told iWitness News on Thursday.

The vehicle crashed into the concrete fencing wall of a house near a sharp corner in the road in Layou sometime around 1 p.m.

Stephens said that the vehicle was not running late for the funeral as some persons have claimed.

“That’s not true. It was going to Spring Village. It was more than in time because the viewing was for 2:30 so it wasn’t really running late for any funeral. That’s not a fair comment.”

He said it is also “not true” that the driver had consumed alcohol, as claimed.

He said the funeral home was able to put things in place to ensure that the funeral took place that day.

Stephens said he does not think that the incident would negatively affect the image of the funeral home, which began operating on May 22.

“I think that people understand that hearses and all of these things are man-made and no one can predetermine what kind of outcome can occur.

“You can have a brand new vehicle and it fails, a new plane and it fails, the bridge in Miami-Dade a few months ago, brand new, failed. So, failure can occur, but we have since put additional mechanisms in place to ensure that things like this do not occur in the future.”

He noted that the funeral home is relatively new, but said, “… accident is not something that people premeditate and they allow it to happen, except they have some ulterior motive, which we do not hold because our role is to serve the public of St. Vincent and the Grenadines in a most exemplary way”.

The funeral home is based in Mesopotamia.