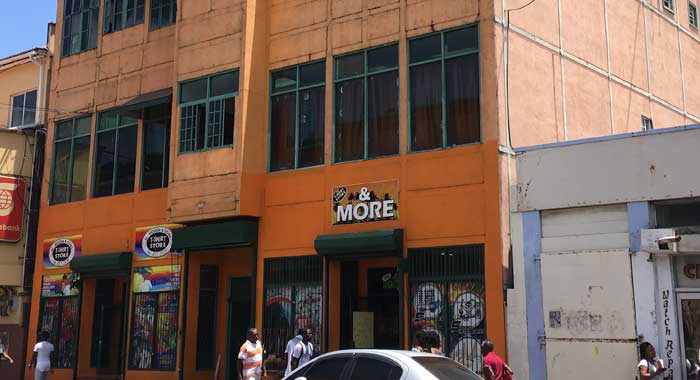 The building in Kingstown where the Ministry of National Mobilisation is located. (iWN photo)

The Public Service Union (PSU) is accusing the Unity Labour Party administration of violating the Occupational Safety and Health law that it has said demonstrated its love for workers.

Elroy Boucher, head of the PSU, told a press conference on Monday that the government’s talk about love for workers is “a statement in theory not necessarily in practice”.

Boucher said he came to that conclusion because of the conditions at several government offices and agencies, including the Ministry of National Mobilisation.

The union leader outlined some of the problems at the ministry’s office, located near T-Shirt Store on Halifax Street, Kingstown.

Boucher noted that the building is sandwiched between two others and is about three floors high.

The office of the permanent secretary is at the top floor and there are other offices on the lower floors.

“The building has little or no ventilation, the air conditioning system doesn’t work,” Boucher said.

“If you are at the top of that building for more than an hour on a typically sunny day, you will be drenched in sweat — because I have gone there. That is the condition in which the permanent secretary has to get her work done, she has a little fan by her desk…

“You just have to walk through Kingstown and you will feel the heat and you can imagine what is going on in that building itself.”

Boucher said that the union wrote the minister, Frederick Stephenson about a month ago and got no response.

He said the letter came after a PSU meeting with the permanent secretary.

“So, we are aware that the permanent secretary has been making every effort to have the workers in that building relocated, because there is no other solution.”

Boucher said the situation is compounded by the fact that there is a t-shirt printing press on one of the floors of the building.

“And if you walk though that building on a day when that is in operation, the fumes from that [operation] permeate the building; we never know the impact on the health of the workers because those things don’t normally happen immediately. They happen over a period of time.”

He said that the OSH Act says, “Every occupier of an industrial establishment that is not ventilated by a functioning air conditioning system shall secure and maintain therein adequate ventilation by the circulation of fresh air.”

Boucher said that two weeks ago, the senior assistant secretary for the ministry was forced to send the workers home half day because of the intense heat.

“In fact, I have been advised that the workers are allowed to go home around 3, one hour before the cut off time for work, because of the heat. And you only have to be in that building for a short moment to understand the intense heat that is in there and all those workers sit there faithfully and get their work done. The failure of Minister Stephenson to even respond to the union’s letter for a meeting to even address the problem can be a testament to his lack of concern for the welfare of the workers,” Boucher said.

He said that while there has been talk of relocating the workers, the situation has existed for over two years.

“So, the passage of the Occupational Safety and Health Act has really done nothing to improve the conditions of those particular workers in the Ministry of National Mobilisation.”

‘Deplorable’ conditions at Canouan at the Revenue Office

He said there is a similar situation in Canouan at the Revenue Office, which houses the immigration and other departments of government.

“The conditions under which those workers have to work are deplorable. We are talking about kitchen cupboards in deplorable condition, literally rotting down, roof’s leaking.”

He said attempts have been made for some time now to have those issues addressed.

“And all we are being told is that they are working on it. But persons have to leave their homes and then they have to go to work in those same conditions.

“We want to call on the minister of finance and the honourable prime minister to address these issues. You have boasted about the care and love demonstrated by the passage of the Occupational Safety and Health Act. But to comply with aspects of the act, that is a problem.”

He said the union understands the act would be implemented in phases but said there are certain basic requirements for workers that must be adhered to.

“Any threat to persons’ life, health, that comes from the environment that they work in, those must be addressed and at these buildings, there is a possible threat or harm to their health.”

Boucher further said the clinic in Paget Farm is structurally unstable, with the beams separating from wall and “anything can happen at any moment”.

“And those nurses have to work under these conditions and the government is aware of these problems. At a time when we don’t have any salary increases and salaries appear to be frozen, at least they can ensure that the conditions under which public officers are working are taken care of.”

He further said the Bureau of Standard in Campden Park is located in a container.

“And the roof of that container is leaking. There is evidence of rat infestation, mould. You have one bathroom that serves both male and female. Of course, in the Occupational Safety and Health Act, it states that you must have separate washroom. There is a narrow space in which the officers have to operate. So that container is unsafe for the workers to operate in.”

He said that the union has met with the permanent secretary in the Ministry of Agriculture and has gotten nowhere in addressing those issues.

Boucher said that having inspected the building, the Public Health Department recommended that it be vacated as soon as possible.

He said he union has been trying to get resolution to several issues that are affecting public officer.

“And when we get to the point where we get no feedback from the authorities, we are, therefore, forced to take the next step, which is, come to the media and let the information be out there in the public domain in an attempt to bring some pressure to bear on the respective entities.”