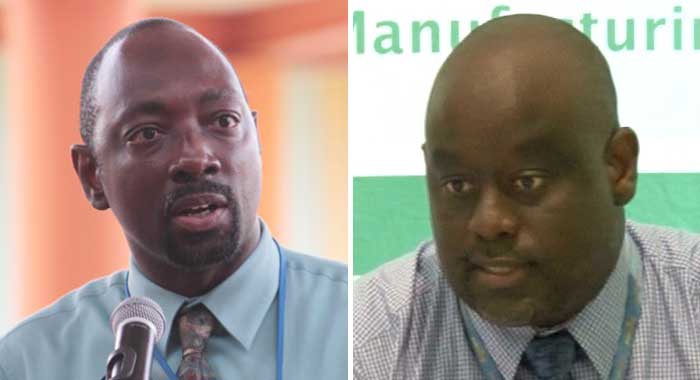 The heads of two state-owned entities in St. Vincent and the Grenadines (SVG) have denied trying to frustrate efforts to unionise their staff, as the Public Service Union (PSU) has claimed.

However, Hadley Bourne, chief executive officer of Argyle International Airport, admitted to iWitness News on Wednesday that the Labour Department, in addition to the PSU had levelled that accusation against him.

Bourne, and Director of the SVG Community College, Nigel Scott, against whom the accusations of frustration were also levelled, told iWitness News separately on Wednesday that they would welcome as their staff’s labour rights representative any union that meets the required threshold.

Bourne and Scott were responding via telephone to comments made by PSU president, Elroy Boucher at a press conference in Kingstown on Monday.

The trade unionist said that for some time now the PSU has been trying to gain recognition as the representative of workers at the Community College and AIA.

“In the case of the Community College, we have submitted that we should be recognised as a union because we have 50 plus one of the membership.

“The Labour Department came in and they checked their books. And when all was done and the college management has discounted one or two persons, they said we were short by two.”

“Today, we still have gotten no response from the college,” he said, adding that the issues had been unresolved for some time.

“… in 2017, a poll was called at the college and when that poll was called and the Labour Department went in and they conducted the poll and discovered that the union had gotten some 90 per cent of the workers who were polled.”

He, however, said that only 51 out of 165 workers at the college were polled.

“A recognition was issued and then recalled because it was stated that the union did not have the 50 plus one [per cent] out of the entire staff.

“We have no control over who votes at a poll. We were not even allowed to go on the compound of the college. So, we were hoping that a simple majority would suffice, but that did not happen,” Boucher said.

The PSU president said the workers came together and decided that they wanted representation.

“They took a drive among the staff and they joined the union. So, even on their own initiative, they came up with the 50 plus one. But yet the college is refusing to issue recognition and you cannot get anything addressed that relates to the workers at the college because of this impasse.

“And I really don’t understand. This is a Labour government and a nationally owned institution whose management and board are bluntly refusing to issue recognition so that the workers can be represented as a bargaining unit and there can be collective bargaining.”

Boucher said the matter would soon be turned over to the Minister of Labour, Saboto Caesar.

However, Nigel Scott, director of SVGCC, told iWitness News on Wednesday that the PSU had not reached the required threshold.

“You can speak to the Labour Commissioner on that,” Scott told iWitness News.

He said that less than 50 per cent of the staff at the college has joined the union, adding that once the union reaches the required threshold, the college would have no objection to the union representing its staff.

However, when contacted on Thursday, the Labour Commissioner, Arlene Lewis, told iWitness News, “I have no comment to make.

At his press conference, Boucher said that a situation similar to the one at the college exists at the Argyle International Airport “where we have been trying, more than a year ago, to have recognition but our efforts have been frustrated by the CEO, who happens to be a resident of Barbados”.

He said he was mentioning Bourne’s nationality “because the actions of the CEO will never be tolerated in Barbados”.

The PSU president accused the AIA chief of having “deliberately gone out of his way to frustrate the efforts of the union.

“When the union went into AIA and wrote and asked for recognition, we met with the CEO and he told us plainly that he wants to give an opportunity to another union. It was quite shocking,” Boucher told the media.

“No other union came forward at that time to represent the workers, the workers called for one particular union, but he had to go out of his way to try and get another union involved, citing democracy,” he further said of Bourne.

Boucher said the poll was supposed to have been conducted in May 2018.

“Then we were informed that the AIA called off the poll because they had extended an invitation to CTAWU to come and meet with the workers.

“These tactics are anti-union and anti-labour and our government is a signatory to the ILO conventions on collective bargaining and freedom of association.

“These tactics have even frustrated the Labour Department which has written to the CEO in frustration, because they were attempting to get their work done and they themselves are frustrated by the actions of the CEO of Argyle International Airport.”

He said that the matter has gotten to a stage where the Labour Department has turned it over the Minister of Labour, Saboto Caesar “as the final step because they cannot do anything more about it.

“And I want us to understand that we have a Labour Department that has that responsibility, but yet that is being frustrated by the management of the airport, a management who cannot have that sort of behaviour in his own country because I am familiar with the union that represents those workers at the airport in Barbados. He would not be allowed to do that.

“But, in St. Vincent, he can even frustrate the efforts of the Labour Department in getting their work done, and while that is happening, the workers [at AIA] have no representation.”

Boucher said there have been reports of workers being fired at AIA, adding that some of the dismissals might have been justified.

“… but there is no way to challenge what is being done, on the workers behalf; no way, because he doesn’t want to entertain any discussion with the union unless you are the recognised bargaining agent. A Bajan in St. Vincent frustrating the efforts of a trade union, the Labour Department, and the workers.”

Boucher said that he wrote the minister of labour more than a month ago but has received no reply so far.

“His deafening silence can be interpreted as a lack of concern for what ails workers in this country,” the union leader said.

He said that if Caesar cannot manage these labour issues, he should ask the prime minister to assign the portfolio to another minister.

“These are not the only issues that he had before him that he has to deal with as it relates to labour. And he has not been addressing the issues. He has been ignoring them. These days are not good days for workers in St. Vincent and the Grenadines. We have a salary freeze and you would expect the conditions of work and labour relations, therefore, would be good but they are deteriorating slowly.”

No majority at AIA

Speaking to iWitness News on Wednesday, Bourne said that while the PSU had members who were transferred from E.T. Joshua Airport to the AIA, “it was still in a minority.

“I had no objection to the staff being unionised,” Bourne said, adding that at the time when the PSU requested a poll through the Department of Labour, another entity showed interest.

“And I am appalled that he would think that I would go out of my way to bring someone else.”

Bourne said the labour commissioner was written in relation to that and it was the Commercial, Technical and Allied Workers’ Union (CTAWU) had requested time.

“And I said that in the interest of democracy that they should be given that time. I did say that, but that was at their (CTAWU) request.”

Bourne said that the initial poll was scheduled for May 23 and CTAWU wrote on May 17 requesting postponement and to meet with the staff.

“And even in the meetings we had here, they did say that they gave us time to get settled, so for Mr. Boucher to be saying it has been over a year, I find that appalling, but, in another time…

Bourne said the Labour Department had rescheduled the poll for June 5 but wrote him on May 30, saying he was frustrating the process.”

He said that when the Labour Department wrote on May 30, the poll had already been scheduled for 9:30 a.m. on June 5.

“And we had no objections. … I responded on the 31 saying basically I had no problem with the poll and Mr. Bailey, who is the general secretary of PSU was copied, Mr. Joseph Bonadie, of the CTAWU, was copied — because those are the parties that were interested — and the minister, because we were basically saying the Labour Department and the Union should do what they are supposed to do.

“… Mr. Boucher is right. I was heavily involved in the trade union movement in Barbados and I just left them to do what they want to do. So, for him to be blaming me, I find that very appalling.”

Bourne said he thinks that Boucher wanted the process to happen in his own time and at his own pace and that probably why he figured it is being frustrated.

“And even if you look at it, in all honesty, an organisation this size and we have only have two unions come forward, I don’t see why he figures I would want to frustrate the process,” he said of the AIA, which has some 300 staff members.

Bourne reiterated that he has no objection to the workers being unionised.

He said the PSU had visited the AIA staff again on June 18.