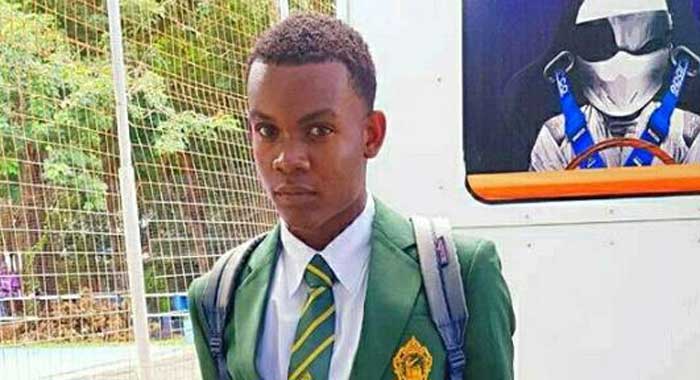 Malcolm Britton received a stern reprimand but still has to live with the reality of a drug conviction. (Photo: Facebook)

A 17-year-old youth who was nabbed with two pounds of marijuana in his backpack in February, when he was a Form 5 student, escaped a fine, jail time or a more serious penalty after being found guilty at the Serious Offences Court on Friday.

She, however, rejected Senior Prosecutor Adolphus Delplesche’s suggestion that she invoke Section 37 of the Criminal Code.

If the magistrate had done so, the law would have treated Britton as if he never had a criminal record.

The court heard that on Feb. 19, 2018, police, acting on information, intercepted Britton at the wharf in Port Elizabeth, Bequia, shortly after he had disembarked a ferry.

Britton was returning from school and was dressed in his school uniform of the St. Vincent and the Grenadines Grammar School, from which he would graduate in June.

Corporal of Police Nigel John told the court that he approached Britton and asked him if he had anything in his bag belonging to anyone else.

The youth told the police officer that one of the notebooks belonged to a friend.

John, a Rapid Response Unit officer, was accompanied by PC Pompey, of the same unit.

The corporal told the court that he requested a search of the bag, to which Britton consented.

He said that when he took the bag, the strong scent of cannabis was immediately detected.

Inside the bag, the police found three notebooks, and one Grammar School t-shirt wrapped around the two packages of marijuana.

In determining the sentence, Browne-Matthias considered Britton’s role in the operation.

“This was not a school exercise. This was a drug operation,” she said in a stern voice tone, apparently intended to drive home to the youth the possible consequences before him.

The magistrate had indicated that she agreed with the prosecution that a custodial sentence should be out of the question.

She said Britton might have played a lesser role in the drug operation and might have acted “under direction, if not duress”.

The magistrate, however, said she had to consider the aggravating features of the case, which she said included the quantity of the drug and the attempt to conceal them in a school t-shirt.

She also said she looked at the youth’s vulnerability to being exploited, saying this might be what happens “when you think you are big boys to handle certain things and bigger boys target you…

“When you are young, you take risks; you engage in foolish acts without thinking. That is the province of youth.

“All that being said, actions have consequences and when you chose to do something, there are consequences,” the magistrate told Britton.

She said that the youth was lucky that there hadn’t been a worse consequence for him.

“You were just arrested. Consequences in these matters often lead to death. You could have very well not been here at all.

“On a school day, you could have done other things to enhance yourself.”

The magistrate told the youth who went on to write eight CXC subjects, she hopes his result would be good and that he had put in work on the other days, besides the one on which he was nabbed with the drugs.

Britton had the benefit of his notebooks for his examination preparation, as Delplesche had instructed police to return them to him, even with the trial pending.

This fact came out during cross examination of the arresting officer, when the defence counsel objected to the bag being tendered into evidence, noting that it no longer continued the notebooks.

In his evidence, Britton told the court he did not go to class on the day when he was nabbed with the drugs, because his teachers were absent.

He said he spent the day relaxing at various places outside the schoolyard, but denied knowledge of how the marijuana came to be in his school bag.

Browne-Matthias told Britton that she could consider a fine and have his guardians pay, which means he would go to jail if they are unable to pay it.

“But I will take the chance to make you ponder on what you missed. You may have missed death. You have a future, take it and handle it,” the magistrate said.

She told the court that she would invoke Section 37, as the prosecution has suggested but said she would reprimand and discharge the youngster.

She told him that things could end up differently for him if he doesn’t want to make an about-turn and make use of the years ahead of him.

In his cross examination, Delplesche clinically peels away Britton’s explanation of how the drug might have come to be in his bag.

Britton had initially told the court that he is a methodical person, but later attempted to present himself as a careless student who would leave his bag unattended and would not check it after retrieving it.

The youngster told the court that on the day in question, he left Bequia on the 6:30 a.m. ferry. He said that he didn’t attend class for the first period because the teacher was absent.

Britton told the court that the spent “the morning session” at the school tuck shop before going downtown to Subway restaurant, on James Street, for breakfast sometime around 10.

He said he went back to his school sometime before 11 a.m., then moved from the tuck shop to Pit Stop, a restaurant located around the circle near the Grammar School.

The defendant said he spent the lunchtime around the circle, then went back to Pit Stop after lunch and stayed there until after 3 p.m.

Briton told the court he took the 6 p.m. ferry home.

He said that on the ferry, he left his belongings downstairs and went to the corridor, where he talked with friends until the boat docked.

Britton said that the police officers approached him after he disembarked the vessel after the one-hour crossing.

During cross-examination, Britton said he didn’t go to the library on the day in question, adding that he decided to take a rest.

He said that when he left Bequia, he had three notebooks, a textbook and the t-shirt, in his bag, adding that the t-shirt had been there since he wore it to a school event the previous week.

The defendant told the court that a friend had placed a notebook in his bag when they were coming from Subway.

But the prosecutor quickly retorted, “You just said that when you left Bequia that day, you had the three notebooks and the textbook in your bag.”

But Britton responded that his friend had removed one notebook and replaced it with another.

“Did you go to Bishop’s College that day? Did you meet a fella name Tumba?” Delplesche then asked.

It was only then that Briton admitted that he had omitted, during his evidence-in-chief, that he had gone to that section of the city that day.

He told the court that he, along with two other students, had gone to Kingstown Technical Institute, located near Bishop’s College — in the Paul’s Avenue/Lower Kingstown Park area — to meet with his technical drawing teacher.

“I am putting it to you that your journey to KTI that day was to collect the weed,” Delplesche told the defendant.

Britton paused for a while then said, “No. How could I do that?”

The prosecutor also put it to the defendant that he had his bag with him all day during the day in question.

Britton said that was not the case.

In his submission, defence counsel Grant Connell asked the court to believe his client’s story.

The lawyer asked the court to imagine what would happen to him (Connell) if he were to leave his bag in his open-top pick-up truck and someone where to plant drugs in it.

However, in his submission, Delplesche asked the court to make certain inference.

He noted that the police had acted on information. The prosecutor further told the court said that if the two police officers could smell marijuana coming from the bag before opening it, it stands to reason that Britton would also.

In addition to this point, the chief magistrate, in coming to her verdict, said that the difference between the weight of the bag when it had only the notebooks and t-shirts inside would be significant, compared to when it contained the additional two pounds of marijuana.