‘I know exactly how it go with mekking baby,’ magistrate tells incredulous defendant 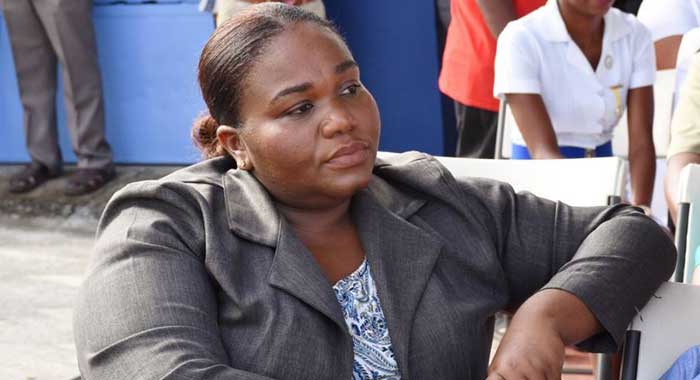 Chief Magistrate Rechanne Browne said she was please with the student’s progress although he was yet to reach the 50% average. (File Photo: Lance Neverson/Facebook)

A man who was on Friday nabbed driving a vehicle while being barred from obtaining a driver’s permit might have learnt that it is not easy to fool a mother with a tale about pregnancy.

If Kingsley Holder, 25, of Belair, plans to continue driving without a licence, he can use the next four months he will spend in jail to come up with a better story.

Police conducting traffic stops at Gibson Corner on Friday say Holder, whom they knew had been barred in February from obtaining a licence for a year, was driving a car in the direction of Lowmans Hill.

When the police pursued him, honking their horns for him to stop, Holder took them on a 20-minute high-speed chase that ended in Campden Park, when he drove into a dead end.

But Holder was not done in with his attempt to evade capture.

He exited the vehicle and tried to outpace the police on foot.

However, the lawmen nabbed him in some bushes and slapped him with three charges: driving while being barred from obtaining a licence, during without a driver’s permit, and driving and uninsured vehicle.

He pleaded guilty to all charges at the Serious Offences Court in Kingstown on Friday.

Asked by Chief Magistrate Rechanne Browne-Matthias what he had to say for himself, Holder said, “Ah wonder if you could give me another chance please?”

“When they start off like that, bare lies coming,” Chief Magistrate Rechanne-Browne Matthias commented.

The defendant, however, said that was not the case with him.

He said that when he had gotten into an accident in February while driving without a licence, he had lied to the police and that had not helped him.

Holder, a mechanic, said that the owner of the car had brought the vehicle for muffler repairs two days earlier.

The mechanic said that his pregnant girlfriend was bleeding since Thursday, do he decided to take the car to the owner in Campden Park, so he could be paid and use the money to take his girlfriend to see a doctor.

“That don’t make sense,” the magistrate told the man and asked him if he could not have told the owner to collect the car.

Holder said he should have done that.

The magistrate further asked him if he was, in fact, saying that his girlfriend was bleeding since the previous day.

“Yes, because the baby in the wrong tube,” the defendant responded.

“So, the baby nah loss between yesterday and today? She lose the baby already; the baby done gone through completely. You really know wha’ you telling me? Me ah mommy yo’ know. I know exactly how it go with mekking baby, whether in the right tube or not,” the magistrate said.

“And if it in the wrong tube, she would be having excruciating pain, first of all, making her almost immobile and requesting to be lifted or taken to somewhere.”

Holder then told the court that his mother had told him that maybe his girlfriend had tried to abort the child.

“You still talking about bleeding?” the magistrate told the defendant.

“My mommy try tell me that she try throw it way,” the defendant maintained.

The magistrate told the man that if his girlfriend was in fact bleeding, she was supposed to be hospitalised since the previous day, “take a D&C, scrape her walls and get rid of that.

“Close that story now,” she advised.

She went on tell the man if his story was, in fact, true, how is it that he could have tried to go to Campden Park then back to Belair to get the money to take is girlfriend to see a doctor.

“She wasn’t in the worst way, then?” the chief magistrate said.

But holder maintained that his mother had told him that maybe his girlfriend had tried to abort the child.

He went on to tell senior prosecutor Adolphus Delplesche, that his girlfriend was at home and had still not seen a doctor.

“Your honour, this is nonsense,” Delplesche told the court.

The magistrate further noted that when the police stopped Holder, rather than complying, he took the police on a high-speed chase.

The magistrate further told Holder that he should have stopped when the police signalled him to.

“The first thing you said, ‘Officer, jeez you; lord. Yo’ ketch me. Me girlfriend sick. I in a spot.’”

She noted that even after the vehicle chase ended Holder took the police on an on-foot chase.

“And the woman on dying?”

Holder said he did this because he was frightened.

“You frighten because yo’ know,” the magistrate said.

Holder told the court that he would not commit the offences again.

The magistrate agreed, suggesting that she would jail him.

For driving while being barred from holding or obtaining a driver’s licence, Browne-Matthias sentenced Holder to four months in prison, giving him a one-third discount on the maximum sentence, because of his guilty plea.

For driving without a permit, Holder was ordered to pay EC$500 forthwith or, in default, five weeks in jail.

He was also jailed for four months for driving an uninsured vehicle.

The custodial sentences will run concurrently.

The magistrate further disqualified Holder from holding or obtaining a driver’s permit for one year, beginning last Friday’s date.

Holder was seen wiping tears after being jailed.

It was not clear if the woman he was seen fraternising with as he was being led to prison was the girlfriend he said was bleeding.

2 replies on “‘I know exactly how it go with mekking baby,’ magistrate tells incredulous defendant”