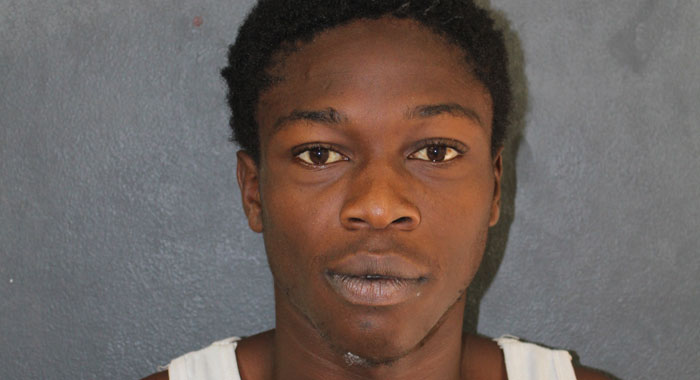 Kevon Williams, at age 19, has a history of crime and will spend the next six years in jail.

The 19-year-old man who was jailed on Thursday for six years for last weekend’s burglary spree in Kingstown had 10 previous criminal convictions.

Kevon Williams, of Kingstown, originally of Richland Park, had his first encounters with court when he was just a juvenile.

His criminal activities continued in the years during which he should have been in secondary school, which Williams did not attend.

“That’s what your record is showing me,” the magistrate said, noting that the man’s first conviction was in 2010 for wounding.

Williams told the court that the person he wounded then was his cousin.

“Those matters, you were a juvenile then, so you went to the Family Court,” Burnett observed.

The man’s record further shows that he was convicted of attempted burglary in March of 2014.

“October of 2014, the real thing, burglary,” the magistrate said.

“You attempted in March, you completed the act in October.”

Williams was placed on curfew in 2010 and in 2013, the court ordered him to do community service.

He was reprimanded and discharged for burglary and attempted burglary because of his age.

“I am showing how lenient the court has been with you. However, the court got fed up of you in 2015, when you burglarised — went to Cobblestone and you got six and 12 months in prison, respectively,” the magistrate said.

The magistrate further noted that Williams was charged for damage to property in 2015 and was sent to jail for six months.

In 2014, he escaped lawful custody after being sentenced for burglary.

“What do you have to say for yourself? Tell me. Anything you want to say?” the magistrate said.

Williams asked the court for leniency and the magistrate responded.

“Alright. That I will do. Anything else?”

Williams had no response, nor any when asked to explain his behaviour to the court.

He, however, said that he alone removed the items that he said he was guilty of stealing from two offices inside the Ministerial Building between Aug. 17 and 20, 2018.

Police only recovered two of the laptops from the man, who was arrested after his crime was recorded on the building surveillance system.

Williams declined to say what he did with the other items.

In addition to burglarising the Ministerial Building, Williams also broke into two businesses in the city and was shot in the thigh by a business owner, but still managed to escape. The wounded man was nabbed in Paul’s Avenue, but someone had already removed the bullet for him.

Williams did not tell the court what he did with the stolen items that police did not recover.

The magistrate imposed two concurrent four-year jail terms for the burglaries at the Ministerial Building.

After completing this sentence, Williams will also serve a two-year sentence, as he was given two concurrent sentences of that duration for his crimes against the businesses.