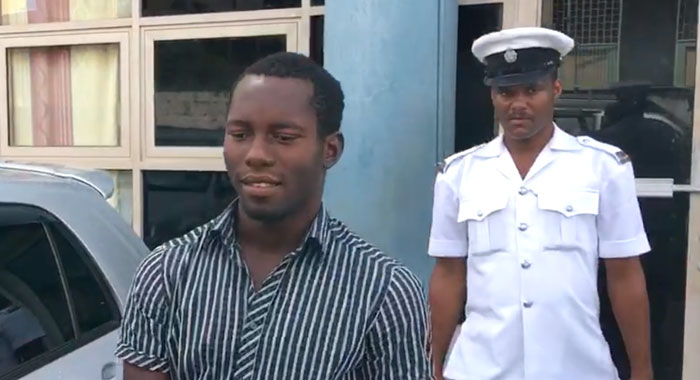 The man accused of murdering Christian cleric Ian Enoch asked police on Wednesday if his handcuffs must be removed for his court appearance.

Anwar Jack, 24, asked the questions of the detective who escorted him to the Kingstown Magistrate’s Court on Wednesday, where the charge was read to him.

Jack’s question came as the detectives were about to remove the handcuffs just before entering the courtroom.

The detectives told him yes, and he said nothing further.

Jack was not required to plea to the indictable murder charge when Senior Magistrate Rickie Burnett read it to him.

He was remanded into custody and will appear before the Serious Offences Court on Sept. 3, 2018, when the date for a preliminary inquiry would be set.

Jack did not respond when iWitness News asked him as he was escorted to a police vehicle after the court appearance, if he had murdered Enoch, as alleged.

The Crown is alleging that Jack murdered Enoch at Argyle sometime between 8 p.m. on Friday and 10:40 a.m. on Saturday, by chopping him about his body with a cutlass.

The body of Enoch, a 50-year-old travel agent supervisor of Brighton, originally of Trinidad, was found wrapped in a sheet at Argyle on Saturday.

Enoch is also a bishop in the Spiritual Baptist Church.

Sources have told iWitness News that Jack has told police that he and Enoch had a sexual relationship.

8 replies on “Accused murderer questions removal of his handcuffs (+video)”