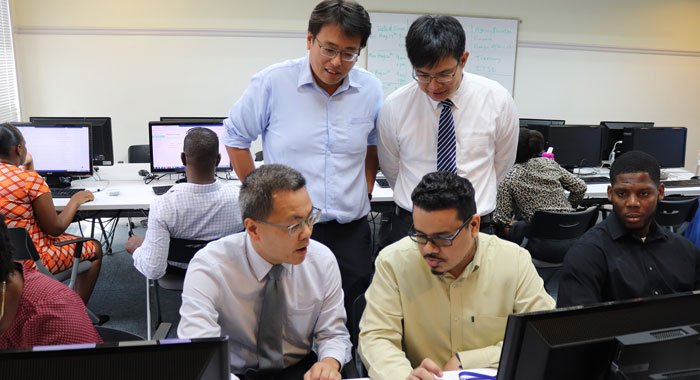 Two Taiwanese ICT experts, director Tsu-Wei Kao and senior engineer Yu-Che Huang of the Institute for Information Industry, in Taiwan, visited St. Vincent and Grenadines from July 26 to Aug. 23 to complete the installation, testing and training of the Electronic Document and Records Management System (EDRMS) of the Government of the St. Vincent and the Grenadines (SVG).

In 2016, the governments of Taiwan and SVG signed an agreement to launch the project of EDRMS. It aims to develop mechanisms and IT infrastructure to improve the efficiency of processing information among different ministries of the Government of SVG.

David Fu, project manager of the EDRMS dispatched by the TaiwanICDF, said that after two years of efforts, with the full support of the Information Technology Services Division of the Ministry of Finance, Economic Planning, Sustainable Development and Information Technology, the electronic document (e-document) system and e-archiving system within seven different ministries of SVG have been initially installed.

Fu added that Kao and Huang’s visit is part of the EDRMS project.

They not only assisted in setting up and testing the systems, but also provided the 69-hour training courses to more than 400 governmental officials who will be the users of the EDRMS later this year.

Fu indicated that the project of EDRMS between Taiwan and SVG is a comprehensive plan for SVG.

Apart from the installation of e-document and e-archiving systems, the EDRMS project also established the Public Key Infrastructure (PKI) to secure the system.

Most importantly, Fu emphasized that capacity-building is the core component of the EDRMS project. To date, more than 30 Taiwanese ICT experts visited SVG to hold 45 training programmes and 70 workshops for more than 1,200 staff members from different ministries of SVG.

Fu said that the EDRMS is scheduled to be completed and handed over to the Government of SVG at the end of 2018. He expressed his gratitude for the assistance and support provided by the staff of Ministry of Finance, Economic Planning, Sustainable Development and Information Technology, Ministry of Foreign Affairs, Trade and Commerce, Service Commission Department, Treasury, Inland Revenue, Customs and Excise, Information Technology Services Division.

“Without them, the EDRMS project could not be implemented,” Fu said.