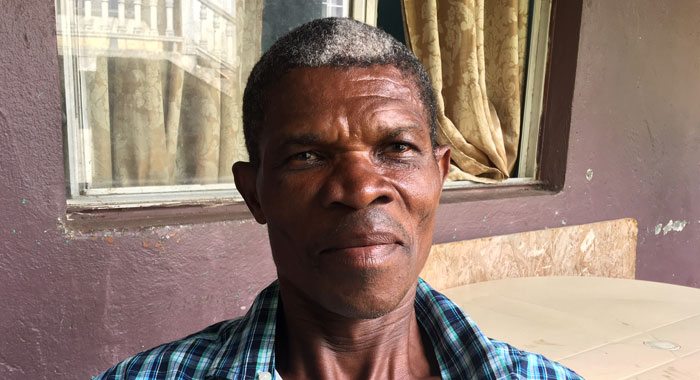 The preacher whose mother was found dead in Byera on Wednesday, two days after she went to attend to her animals says that amidst the recent killings, Vincentians are failing to see that prophecy is being fulfilled.

Freddie Peters, 53, made the point to iWitness News on Thursday as he commented on the death of Evita Dublin, 78, whose decomposing body was found wearing only underwear.

Peters speculated that someone had raped and murdered his mother.

A post mortem on the woman’s body is pending.

Peters is filling in as pastor at their church, the Bethel House of God, where the pastor died some time ago.

iWitness News asked Peters what he thinks is the case with killings recently in SVG, which has recorded 21 homicides for the year.

“I believe that for one, the Lord gave us a prayer that we should pray,” he said and recited the Our Father Prayer.

“I believe that that is no more established in the heart of families. Just few families are carrying out that prayer that the Lord taught us and the Bible says in Luke 17: 30, ‘As it was in the days of Sodom and Gomorrah, so shall it be in the coming of the Lord.’

“That is another scripture that we fail to see has been fulfilled, is being fulfilled. It was a prophecy throughout all the ages but it’s being fulfilled in our age that we are living in and because of that, there is a curse on mankind. We need to stand up against every unclean living.”

He says that the Bible says everyone is born in sin.

Among some of the unrighteous acts that SVG needs to stand up against is “a woman preacher”, Peters said.

Asked about things that might be happening outside the church that contribute to crime, Peters said:

“Let me say this: The Bible says that righteousness exalts a nation and sin is a reproach. So then, if the people who try to live Christian lives stand for righteousness, preach against sin, then the spirit of the Lord will influence the sinners and the environment.”

Peters said that his community is angered by his mother’s death and wants to see the culprit brought to justice.

“People are very angry, very, very angry, knowing that the person who she is in the community that she don’t trouble people, she’s friendly. They are very angry,” said Peters, who told iWitness News that he is drawing strength from his Christian faith.

“I [am] coping because the Lord giving me His grace. He says forgive those that trespass against you that your heavenly father will forgive you. So, after that happen, I realise I need to forgive the person, even though I don’t know who the person is, I already forgive the person who did hat.

“That don’t mean that I don’t want him to come to justice but I already forgive him,” he told iWitness News.

Peters is the second preacher whose family has been affected by sudden and, in his case, suspected, violent death.

On Aug. 18, the body of Spiritual Baptist bishop, Ian Enoch, 50, of Brighton, originally of Trinidad, was found with chop wounds in a hut at the Cayo Village in Argyle.

The Crown is alleging that Jack murdered Enoch at Argyle sometime between 8 p.m. on Aug. 17 and 10:40 a.m. on Aug. 18, by chopping him about his body with a cutlass.