Another teen charged with women’s abduction 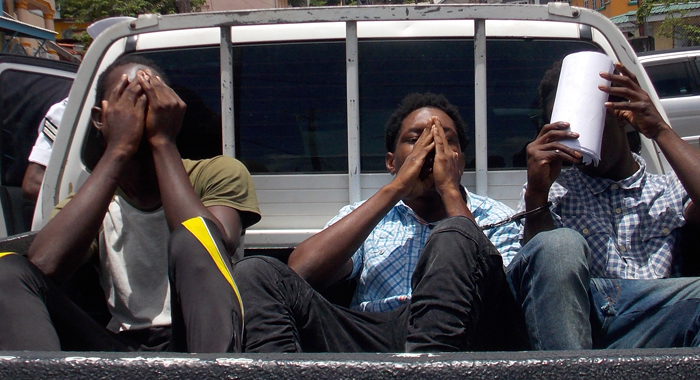 Another teenaged male has been charged in connection with the Aug. 17 gunpoint abduction of four women in Villa.

The charges against Timothy Nickie, a 17-year-old labourer, of Glen, came even as his fellow villager, Dale Hooper and Ozem Oliver, both 16, who had been each granted EC$15,000 bail had more charges brought against them and their bail revoked.

Nickie, joined the two other co-accused on a charge of four counts of abduction.

The crown is alleging that on Aug. 17, at Villa, the trio abducted Alliyah Bullock, of Welcome, Johanna John, of Queen’s Drive, Shanez Francis, of Harmony Hall, and Jade Adam, of Redemption Sharpes.

He was further charged that on Aug. 10, at Glen, he robbed Denise Baptiste, of Glen, of one gold Samsung Galaxy cell phone valued at EC$1,100, and at the time of so doing and in order to so do, put her in fear of being then and there subjected to force.

Hooper, along with Donroy Warner, was charged that between July 24 and 25, at Ratho Mill, they entered the premises of Gregory Ferrari as a trespasser and stole a number of items, including a television set, milk powder, and alcohol.

The men are scheduled to appear before the Serious Offences Court on Monday for the case management.

Hooper pleaded guilty to some of the charges when he was arraigned before the Kingstown Magistrate’s Court, while Oliver maintained his innocence.

The men were not required to plea to several of the charges, which were laid indictably.

During Monday’s court appearance, they are expected to hear the date for the commencement of preliminary inquiries into the indictable charges.

4 replies on “Another teen charged with women’s abduction”