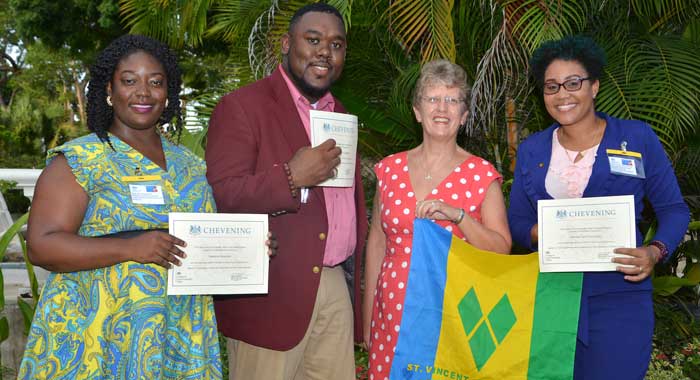 High Commissioner Janet Douglas and the 2018 Chevening Scholarship winners for St Vincent and the Grenadines.

Three Vincentians are among the Chevening Scholarship winners for 2018 announced by British High Commissioner to Barbados and the Eastern Caribbean, Janet Douglas.

The Vincentian awardees are Natesha Alexander, an educator and community activist from Mayreau; Brenelia Tedra Kirby, a full-time lecturer and media personality known as “T.K.” and Tedra; and Kesley Cambridge, who is an administrative cadet in the Ministry of National Mobilisation, Social Development and Youth.

The scholars will be pursuing master’s degrees in quantitative finance and mathematics at Heriot Watt University; corporate communications, marketing and public relations at the University of Leeds; and applied criminology and forensic psychology at Edinburgh Napier University respectively.

During a special send-off ceremony at her official residence in Barbados, Douglas presented the 10 scholars hailing from Barbados, St. Lucia, SVG, St. Kitts and Nevis, Antigua and Barbuda and Dominica, with their Chevening certificates.

She said was particularly pleased to see an increase in the total number of scholarships awarded to the Eastern Caribbean this year.

Douglas said: “We made the call in 2017 encouraging professional, ambitious and forward-thinking leaders from across the Eastern Caribbean to apply for Chevening Scholarships. The region responded in kind providing a larger number of quality applicants, and I am very pleased with this outcome.

“The UK remains committed to providing first-rate educational opportunities for future leaders across the Eastern Caribbean, and I encourage interested persons to step forward and apply. You may be sitting here before me next year, preparing to embark on the opportunity of a lifetime.”

The send-off event was also attended by Chevening alumni, well-wishers and a cross-section of other students who are headed to the UK to commence studies this September.

The event provided a prime opportunity to benefit first-hand from presentations and top tips about student life in the UK.

Applications for 2019 to 2020 Chevening Scholarships are now open until Nov. 7 2018. Interested persons should apply here.

The Chevening Scholarships scheme is the global scholarship programme of the British government.

The scholarships are awarded to exceptional individuals with leadership potential, enabling recipients to study one-year masters courses in a range of subject areas at UK universities.

The scholarships are funded by the Foreign and Commonwealth Office and aim to support UK foreign policy priorities by creating lasting positive relationships with future leaders, influencers and decision makers.