Morgans’ burn victim back in hospital 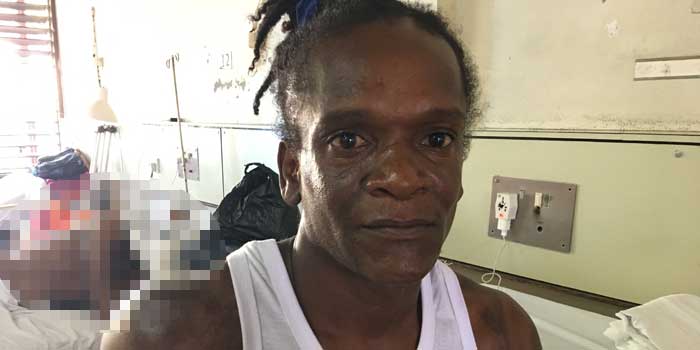 Cuthbert Victory spent six says in hospital last week as a result of the burns he suffered in 2016. (iWN photo)

The Mesopotamia man upon whom the preacher and family poured a hot liquid, resulting in severe burns two years ago was back in hospital last week.

Cuthbert “Mafia” Victory, 38, of Caruth Village, was on Monday discharged after six days’ of hospitalisation.

He went to the emergency room at the Milton Cato Memorial Hospital last week Tuesday after encountering difficulties starting during the previous days.

He said he had pains from his left hip down to his left foot.

“The doctor says is a vein blockage. Through because of the burn, one the vein [was] scorched so it blocking the blood from circulate,” Victory told iWitness News while sitting on his bed at the nation’s premier health care facility.

Victory said that he has had the pains since the April 9, 2016 attack on him in Hopewell, another Mesopotamia village, where he had gone to visit a neighbour of the religious family.

This past April 30, Senior Magistrate Rickie Burnett jailed Nigel Morgan, a preacher and former teacher, his wife, Althia, a clerical worker, and their 23-year-old daughter, Krystal, after finding them guilty on a charge that on April 9, 2016, they inflicted grievous bodily harm on Victory.

The court heard that the older Morgans held Victory in a drain at the roadside near their home while their daughter doused him with a hot liquid — said to be water — poured from an electric kettle.

A video recording of the incident was circulated on social media but was not tendered in evidence, reportedly because the person who recorded it left the country before police could obtain a statement.

In their defence, the Morgans said that Victory had a habit of antagonising them and, on the day in question, had verbally berated them.

Krystal told the court that she was about to make tea because she was having period pains, when she heard the commotion outside.

She said she felt as if her soul left her body then found herself in the street, pouring hot water from the kettle onto victory.

The woman admitted to pausing while pouring the water because she realised she would be hurting somebody, but said she then continued pouring the hot liquid.

Victory told iWitness News on Monday that while he has been having pain to his left side since the Morgans burnt him, the developments last week were sudden.

“But it just act up. Monday when ah reach home from work say I going cook some food, I sit down in the chair. To get up back, can’t get up,” he said in the Vincentian vernacular.

He said that after going to the hospital on Tuesday, doctors gave him pills and injections and ordered that he be hospitalised for further tests and treatment.

He took a scan on Sunday and the doctors decided to discharge him, Victory said.

He told iWitness News that since the attack, his life has been “messed up”.

And while Victory’s burns have long healed, the construction worker said they still affect his performance on his job.

“Sometimes, I working, the heat in the body pushing out,” he said.

He said that he cannot endure the heat of the sun as much as he was able to before he was burnt.

Victory said that he and his lawyer are going through the process of bringing a civil suit against the Morgans.

The Morgans have appealed their sentences but were unable to appear before a court for a bail hearing before the court went on vacation in July.

Victory told iWitness News that he had heard of the Morgans’ appeal of their sentence.

“Well, I can’t do nothing about that. That is their choice. I just hope I get my justice I suppose to get because I ain’t get it in the first place,” he said, referring to the four-year sentence that Burnett imposed on the family.

“The maximum for that is seven years, I know, so basically, they should get the seven years and then I woulda feel better,” Victory told iWitness News.

He said that in the civil suit he is looking for “good compensation for all the time I dey cyah do nuttin, spending a lot of money and nuttin ain’t coming back in, nobody ain’t bringing back nothing.”

Victory said that none of the Morgans have appealed to him for forgiveness.

“For I forgive them, they have to come in front me with good people and good social media,” he said, suggesting that the apology would also have to be published on social media.

Victory is father of two children, one 21 and the other 8.

One reply on “Morgans’ burn victim back in hospital”