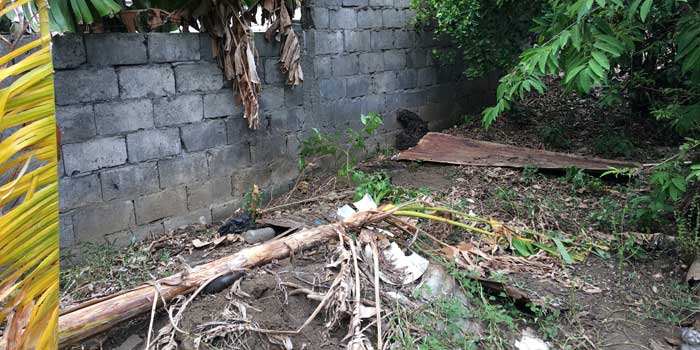 The scene in Questelles were the woman’s body was found. (iWN Photo)

Police have launched an investigation into the death of a Lower Questelles woman whose decomposing body was found in the South Leeward community around 8 a.m. Monday.

A homicide investigation has been launched into the death of the woman, who police say is 47-year-old Yorlande McMaster.

Residents of the village said she was commonly referred to as “Prankathing”.

McMaster’s body was found by Udo Williams, another resident of the community, in the yard of a house where he sleeps.

“I was picking couple limes on that tree. I saw something under a galvanize [sheet]. I thought it was some sort of dead goat or one of those things. But when I looked carefully, I saw it was a human being,” Williams told iWitness News.

Williams said that after he realised it was a human body, he ran to notify his neighbour, who is a police officer.

He said the police officer came and secured the scene and called his colleagues.

Williams said he was still scared and shaken when he spoke to iWitness News a few hours later.

“When I saw it was a dead body, I shock, I dropped the limes all thing,” Williams said.

Williams sleeps at the house where the body was found but spends most of the time at his girlfriend’s house in another part of the village.

He said that when he was going to the property where the body was found, he saw a pair of glasses at the side of the road, but dismissed it since people have a tendency to throw stuff in the bushes along the roadside in the community.

Another resident said that a wig, believed to have been Yorlande’s, was found close to the entrance to the property.

There was dried blood on the bushes on the ground in the yard where the body was found, leading residents to speculate that the woman might have been killed.

The dead woman is the sister of gospel artiste Pearl McMaster.

A woman who answered the door at the McMasters’ house Monday afternoon told iWitness News that Pearl was not in a position to speak to the media at that time.

Residents of Lower Questelles told iWitness News that the dead woman had had a history of alcoholism and had been raped in the past.

A resident of the neighbouring community of Clare Valley told iWitness News that Yorlande had been seen at a funeral there.

One reply on “Questelles woman’s death a suspected homicide”