Man threatens to chop up his mother, sell her ‘old meat’ 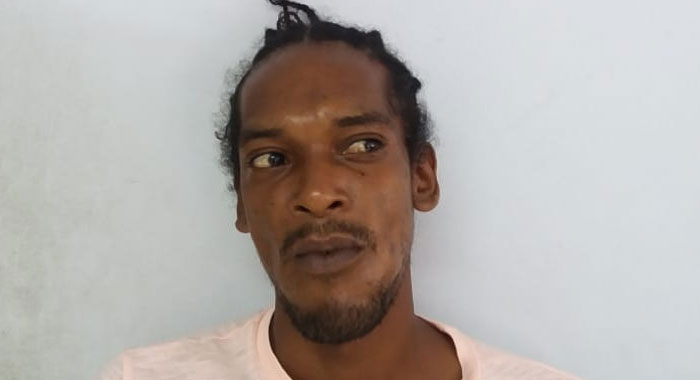 Vandyke Sutherland was jailed for threatening to chop up his mother.

A Sandy Bay man has been jailed for two months for threatening to chop up his 60-year-old mother and sell her “old meat”.

Magistrate Bertie Pompey handed down the sentence on 29-year-old Vandyke Sutherland at the Georgetown Magistrate’s Court on Monday after finding him guilty of a charge that he used threatening language to his mother on April 28.

The court heard that on April 28, 2018, about 5 p.m., Vandyke’s mother, Kathrine Sutherland, was sitting a flight of steps at her home in the North Windward village.

Her son was sitting on a stone under a grape tree and when she looked in his direction, the man told his mother,  “Yo’ stinking mudder ***t, whey de f*** yuh watching me fah?”

He repeated the statement.

The woman told the court that she felt bad after her son spoke in such a manner to her.

She, therefore, told him,  “Vandyke, ah me you really ah cuss? I leave you in the name of the Lord; only Jesus can change you”.

She said that she, too, repeated her statement to her son.

Vandyke then said, “You see all like you!” and went inside the house, returning soon after with a file and cutlass.

He proceeded to use the file to sharpen the cutlass.

“He tell me, ‘Ah go chop up you mudder c*** and who want old meat to buy, they would get it and even when your man come, I will chop up his mudder c*** too,” the mother told the court.

She said she was disturbed by her son’s threats so she filed a report with police.

The woman told the court it was not the first time that her son was using threatening language to her.

“Did you do him anything at all for him to threaten you?” asked prosecutor, Sergeant of Police Delroy Tittle.

The woman said no.

The magistrate then proceeded to ask the defendant if he had any questions for the virtual complainant.

“Nah. She me mother. No questions,” the man responded.

“Just waiting on the penalty… is like she pinning a bomb on me,” he further said.

“Me and my mother have this thing going on long. I was sharpening cutlass to go mountain on my grandmother land.  My mother start to argue over my grandmother land and I ignore she. She leave and gone ah road to bear up and say she ah pray pon me. How me go chop up me mother?  She no get no love for me.”

Asked by the prosecutor why, during cross-examination, he did not tell his mother that he didn’t threaten her, as alleged, Mr. Sutherland said:

“This is overbearing. And, yes, I cuss her already. On 28th April, me nah cuss she, me nah use those words to my mother.”

The magistrate found the man guilty, telling him, “You should be ashamed of yourself to say all these words to your mother — and you’re not even ashamed.

“This is how you treat your mother?” the magistrate further said.

8 replies on “Man threatens to chop up his mother, sell her ‘old meat’”