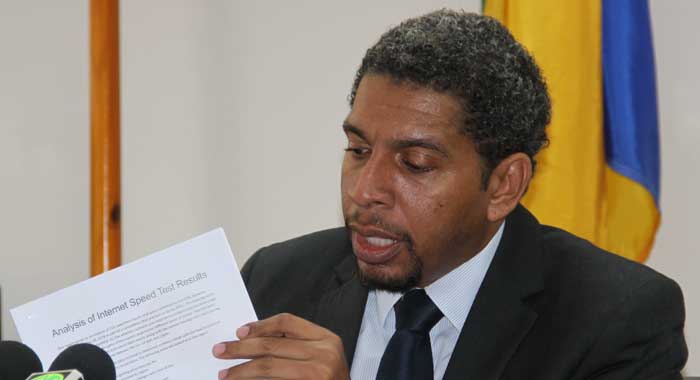 Minister of Information Camillo Gonsalves, on Monday, sounded a note of scepticism as he spoke about the upgrade recently announced by telecommunications provider, Flow.

“I’ve heard that before. It’s been difficult to tell because we had some bad weather the last couple of days and I don’t think it is fair to test them when the weather is at its worst,” he said.

“But I want people to know that I have the NTRC (National Telecommunication Regulatory Commission) giving me periodic analyses of speed test results in St. Vincent and the Grenadines. The analysis shows that if you interview people … you will see that about a third of Vincentians consider their service to be bad or poor…”

Gonsalves was commenting on the heels of the announcement by Flow last month that its latest network upgrade, the Arris E6000 CMTS, aims to improve the capacity of the core HFC broadband network by 50 per cent.

In announcing the upgrade, Flow’s country manager, Wayne Hull, said the upgrade has been able to extend the network capacity so that the company can better serve its customers, who will be able to get more broadband speed and even more value for their money.

Hull said the FLOW team is on a journey of allowing its customers to have a better experience and be satisfied with the services they are paying for.

Citing the announcement, Gonsalves said he has had  “very many animated conversations with Flow about the quality of their service and I have been saying for quite a while that broadband in St. Vincent and the Grenadines is overpriced and underpowered, but I had to add unreliable to that underpowered.”

He said that the simple problem is that Flow has been doing a fantastic job of adding customers “but they have not invested a dollar in upgrading the network to deal with the heavier traffic.

“So they have more and more people on the same network, which was not the most robust network to begin with, in the first place.”

He said that part of the network was inherited from Karib Cable and is, therefore coaxial, while other parts are fibre.

The information minister said Flow has a number that they consider to be an acceptable number of drops.

“I don’t want to discuss Flow’s proprietary information… but they have a number. It is in low single digits, a certain percentage that if you have drops below that then they consider that acceptable. The drops that were taking place in St. Vincent and the Grenadines exceeded that by a factor of seven and they had to do something.”

He said that the company wrote him on Sept. 14 about upgrades, telling him they were critical to delivering the highest attainable internet speed and provide a far better experience to the customers.

Flow said the project cost $1.3 million dollars to implement, with others in the pipeline, including upgrading of the microwave radio system, which services the Grenadines.

“What they have done, they have added something called an Arris E6000 CMTS upgrade that costs about EC$620,000. That widens the pipe. That allows them to take on more customers at peak time.”

He also said that there are too many people connecting to two few nodes and the company is also expanding the number of nodes.

“So one thing is something macro, the road is wider and the nodes are sort of the village roads and they have to improve those as well.”

The node infrastructure costs 360,000 dollars, the CMTS upgrade costs 620,000 dollars, so we are talking about on the order of roughly EC$1 million, Gonsalves said.

“They say ‘the outcome of this project includes the build out of new nodes, thereby reducing the household count per node and conducting line plant change out to improve the quality of the service delivered by the distribution network’,” he said, quoting Flow’s letter to him.

“They are claiming that having installed these upgrades, the drops that they were experiencing that I said was … seven times worse than what they consider acceptable, they are telling me that these upgrades will bring it back down into the acceptable range.