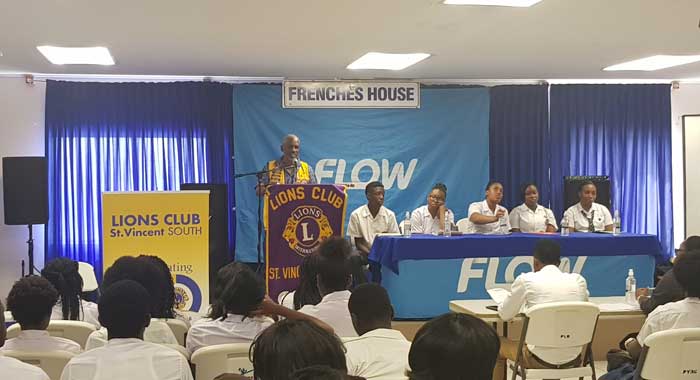 The competition commenced last Tuesday at the Frenches House and saw the participation of six schools.

Junior Bacchus, president of the Lions Club South, said the zone preliminaries were a success. He said he was very satisfied with the delivery of the students on their prepared speeches and emphasised much satisfaction with their mannerisms during their delivery and further applauded the students on the material researched for their speeches.

He further expressed gratitude to Flow for not only being the sole consistent sponsor but also long-time sponsors of almost 30 years of partnership, supporting the competition since 1976.

When asked about the positive impact the public speaking competition has on students, the Bacchus said that over the years the students who participated in the competition have turned out to be exemplary citizens in the Vincentian society and have succeeded in many professions. He further pointed out that the competition is also a medium to build self-confidence and has proven to be a significant way of instilling leadership skills in young people.

Meantime, Flow’s Marketing and Communications Lead, Nikala Williams, expressed gratitude to the Lion’s Club South for their hard work over the years.

She stressed that the competition offers a platform for the students’ voices to be heard on varying social topics and more so prove themselves among their peers.

Williams urged the competing students to exercise seriousness in the public speaking competition as their confidence, and intellect will be put to the test.

She further outlined the rewards of the competition, noting that all six finalists will receive a smartphone along with free combo plans, compliments FLOW.

The school of the 1st place winner of the competition will receive a prize of $3,000, to be used towards an identified school project.

Flow said it continues to make significant investments in the further development of the youths of SVG through educational initiatives and promises to continue to transform the lives of the youths in SVG.

The finals will be held on Oct. 24 at the Methodist Church Hall in Kingstown.