PM casts doubts on benefit of US visa interview waiver 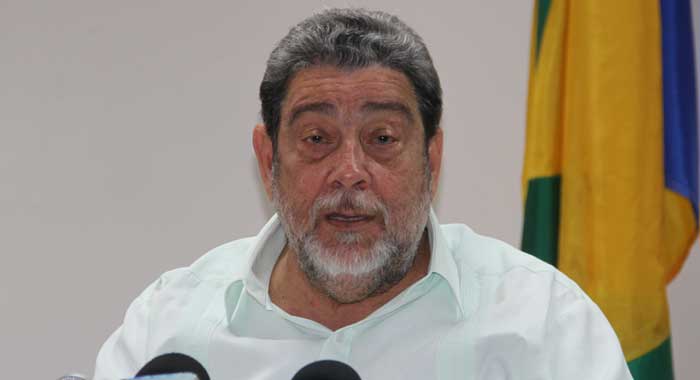 Prime Minister Ralph Gonsalves is suggesting that not many Vincentians would have benefitted had the United States extending the courtesy of renewing their visa without having to travel, in person, to the embassy in Barbados.

The United States Government has not extended to St. Vincent and the Grenadines, Dominica and Antigua and Barbuda the courtesy of having passport holders submit their visa renewal application by couriers.

Some observers say that this is punishment for Kingstown, St. John’s and Roseau, not supporting Washington’s position on hemispheric issues, specifically a recent vote on Venezuela taken by the Organization of American States.

Gonsalves told a press conference in Kingstown on Tuesday that he has not raised with U.S. officials in Bridgetown the reason why the courtesy has not been extended to Vincentian passport holders.

“I haven’t discussed that with the US authorities,” he said of the policy, which will benefit St. Lucians, Grenadians, and nationals of St. Kitts and Nevis, as well as Barbadians, the other countries served by the U.S. embassy in Barbados.

Gonsalves said he has read the reports that SVG and the other independent Organisation of Eastern Caribbean States countries to which the courtesy has not been extended are being punished for not supporting U.S. policy.

“I have read that. But if it is punishment, it’s a kind of a quote-unquote punishment which is really of little or no moment,” he said.

Asked if he thinks that Vincentian passport holders not having that privilege puts them at a disadvantage, Gonsalves said:

“I really don’t know what are all the factors which went into the decision of the U.S. authorities. I am not going to presume that I know the reason, I am not going to speculate what is the reason. I read like what everybody else read about punishment but I express my opinion that if it is a punishment, it is of such a type and nature that I can’t see it being logical.”

Applicants must be physically in their home country or within the consular district of the U.S. Embassy in order to avail themselves of this option

The courtesy is not extended to beneficiaries of the citizen by investment programmes.

“… as I read the conditions, your visa has to expire in the last year, you have to send your fingerprints, there are several conditions. I don’t know how many persons that are going to be able to satisfy all of those conditions that they require from the countries which they have said have the privilege of not going to the mission — going to Barbados to have their visas renewed. I don’t know how many persons are going to be from those.

“The point I am making, if you are having a policy — I am giving an opinion on those who say this is punishment. I am saying if somebody sits up, makes a decision and say, ‘I am going to punish a country.’ That is what you can find? That doesn’t appear logical to me, so I don’t accept the punishment argument… That is the point I am making…”

The prime minister said he knows the nature of Kingstown-Washington ties.

“The relations are good, so I don’t know what got into — what are the reasons for that particular decision,” he said.

He, however, acknowledged that the provision would be of benefit to Vincentians.

“Doesn’t mean at all that in some circumstances it wouldn’t be more convenient for somebody if they are able to satisfy those conditions to have that privilege extended to them. I was raising the question; I don’t know how many persons would be able to satisfy those conditions, which went to the logic of the decision maker to do punishment. So this is why I don’t accept the thesis of punishment,” he said.