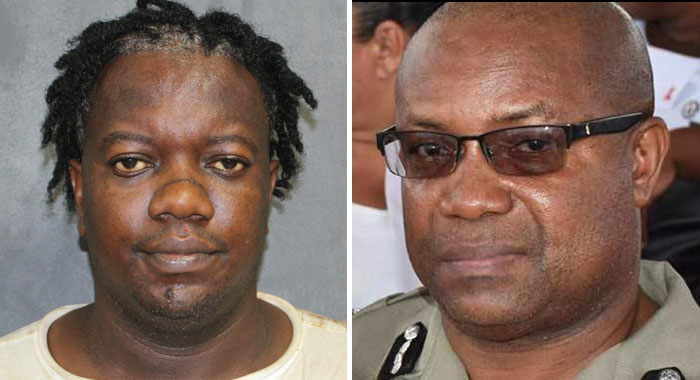 Acting Commissioner of Police, Colin John, has rebutted the claim by a suspended police officer who is facing a number of criminal charges that he beat the junior ranked officer while he was in police custody.

The suspended police officer, Police Constable Ettian Charles, told the Kingstown Magistrate’s Court last Wednesday that the nation’s police chief was among a group of officers who inflicted a severe beating on him after was arrested on Sept. 15.

Charles was suspended from duty in July 2017 when he was slapped with burglary and corruption in public office charges.

Last month, he was charged in connection with the Sept. 15 robbery of Reisha Twana Browne-Caesar, wife of Minister of Agriculture, Saboto Caesar, at their home in Cedars.

He said that that the police chief beat him while he was in custody in connection with the investigation into the robbery, which led to a number of charges being brought against him and other accused.

Charles was also charged that on Sept. 15, at Arnos Vale, he had in his possession one black and silver Smith and Wesson .38 revolver serial number unknown and six rounds of .38 ammunition, without a license issued under the Firearm Act.

He has been denied bail since his Sept. 17 arraignment, amidst claims by Senior Prosecutor Adolphus Delplesche who has told the court that investigators are fearful that the men could interfere with the investigations if granted bail at this time.

However, when he re-appeared in court on Wednesday, Charles said that the police chief had beaten him severely with a baton, resulting in a number of injuries.

The suspended police officer, who is being represented by lawyer Israel Bruce, told the court that he would like bail so as to allow him to seek medical attention for injuries he sustained as a result of that alleged assault.

However, Senior Magistrate Rickie Burnett asked the accused man why he did not mention the alleged beating when he was first arraigned on the robbery charge.

The magistrate pointed out that while he was not questioning his claim, he was noting that he had not made any claim of police brutality during his initial arraignment.

“The most beating I got was from the head of the organisation himself,” Charles said, referring to the acting police chief.

“He is the one who gave me all my wounds,” said Charles who also told the court he believes one of his ribs is injured, citing severe pain in that area.

In addition, he said he sustained injuries to the lip, leg, ankle and head.

Meanwhile, Bruce told the court that he was aware of the allegation that his client had been beaten prior to his appearance in court on the initial charges.

“I have photographs of all the bandages all over his body,” the lawyer told the court.

He further said that whoever beat his client should be “made to pay” for their actions.

When Charles and his co-accused were first brought to court, some of them have visible signs of physical trauma, including swollen and blot shot eyes.

Lawyer Jomo Thomas, who was in court on an unrelated matter, did not comment to the court on the men’s appearance.

He, however, noted in his weekly newspaper column that the magistrate had made no inquiries about the cause of the men’s injuries.

When Charles was arraigned on Sept. 17, his lawyer was not in court.

He told the court that he does not think that only he should have been charged with the gun and ammunition offences.

He said he has children 5 and 7 years old as well as a blind father.

The accused man further noted that he is not charged with burglaries or robberies although the prosecutor had mentioned those crimes.

He told the court that there are people who could attest that the firearm does not belong to him.

Charles told the court he has seen cases where people charged with more serious offences were granted bail.

Before his most recent encounter with the law, Charles was being tried in connection with the July 7, 2017 burglary of the St. Vincent and the Grenadines Postal Corporation, during which he is alleged to have stolen EC$74,121.46 in cash and other items, valued an additional EC$17,486.96.

He was further charged that on July 7, 2017, at Kingstown, being employed in the Public Service and being charged with the performance of duty by virtue of such employment, agreed to receive property for himself or any other person on account of anything omitted to be done by him in the discharge of his duty of office as a policeman.

He was granted EC$130,000 bail with one surety and was ordered to report to police on Mondays, Wednesdays, and Fridays between 6 a.m. and 6 p.m.