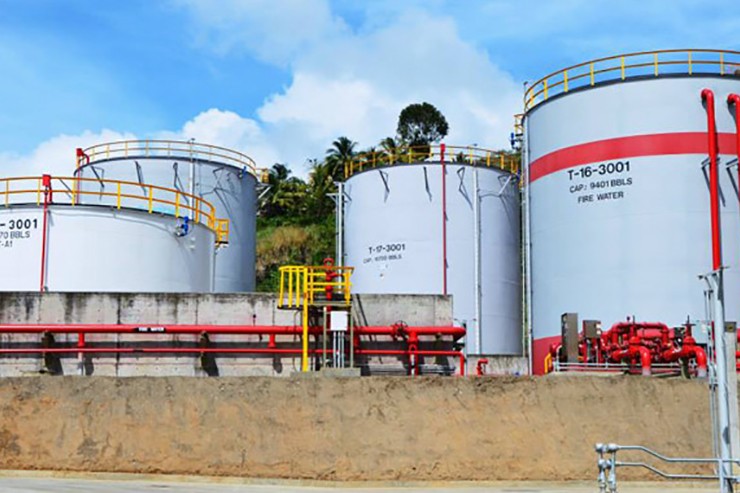 As the United States’ sanctions against Venezuela tighten, St. Vincent and the Grenadines has been forced to innovate to ensure continued fuel security and the upkeep of a Caracas-funded fuel storage plant.

The Hugo Chavez National Fuel Storage Facility at Lowmans Bay, capable of storing 34,000 barrels of fuel, was in April 2015.

The joint venture between the governments of SVG and Venezuela, was constructed at a total cost of US$31.6 million under Caracas’ oil initiative, PetroCaribe.

At a press conference last week, Prime Minister Ralph Gonsalves reiterated that SVG is not getting much fuel from Venezuela under PetroCaribe, Caracas’ oil initiative with a number of Caribbean nations.

He said this is an indirect effect of the sanctions that Washington has imposed on the South American capital.

Venezuela does not own the vessels and payment for their services must be made through a US account.

“We have a small sum of money for Venezuela under the PetroCaribe agreement — relatively small — but we can’t get it to them because of the financial restrictions,” said Gonsalves, whose government began benefitting from PetroCaribe in 2005.

“So if they can’t get money to the shippers, the ships ain’t coming. When the ship don’t come, you don’t get the fuel and we don’t get the financing component of the PetroCaribe, which pays for things like the SET (Support for Education and Training) Programme and they do some poverty reduction programmes and some other specific things and we have given reports over and over about what we have used PetroCaribe monies for…

“Now, I will tell you this: even our staff at our mission in Venezuela, we can’t get the money to them because you have to employ people to do certain things at the mission, chauffer, secretarial staff and the rest of it. These are people you will employ from within that country.

“You have difficulty getting their money for them because of the sanctions.”

“So when you have some right wing people here and some others that are unthinking say, ‘Aah, what a wonderful thing that America is doing, squeezing Venezuela so no foreign currency can pass to go to any of the banks’, they don’t realise what they are supporting is to even hurt ourselves,” he said.

Gonsalves said that Rubis, one of the petroleum products suppliers in SVG, has its own Jet A-1 storage facility that can store.

“Now, as you know, if you don’t have those facilities and you don’t use them, they will go into disuse…” Gonsalves said.

He said there are two options, the first being renting the facilities, adding that at least one entity wants to rent them.

The second option is that PetroCaribe SVG, a state-owned company, could buy the fuel and sell from there.

The prime minister said he has, therefore, given PetroCaribe SVG permission to purchase fuel.

A local distributor is buying the diesel-gasoline mix, the prime minister said.

Gonsalves said that PetroCaribe is in discussion with Vinlec, the state-owned electricity company to continue to purchase fuel from the PetroCaribe.

“We purchase from one of the two traders here in St. Vincent and the Grenadines and the price is competitive because of the volumes,” he said.

Regarding the proposed continued use of the state-owned fuel farm, Gonsalves said:

“It’s using an asset which we have. It doesn’t make sense leaving the asset there. That asset is about $80 million — a big asset. So we use it and we use it to be able to make some money. Simple, straightforward, and, at the same time, to provide energy security because you know we have had the maximum 10, 12 days or thereabout of supply.”

He said that Petrotrin, the state-owned oil company in Trinidad and Tobago, no longer exists and Sol and Rubis — the retailers in SVG — will have to buy fuel further north, for examples in The Bahamas, the Dutch Antilles, the east coast of the United States, or Antigua, where West Indies Oil operates a large, state-owned storage facility.

He, however, said that if fuel is brought from the United States or the Bahamas and there are two back-to-back hurricanes in the area, there might be a problem with the supply.

“So it’s a good thing that we have a facility where we can have three months’ supply.

“Of course, when the government takes an initiative which is grounded in common sense, you always will hear commentaries to the contrary, but we do what we have to do from all the facts which are before us and to make sensible decisions,” Gonsalves said, in apparent anticipation of a response to the development.

4 replies on “US sanctions force PetroCaribe rethink in SVG”