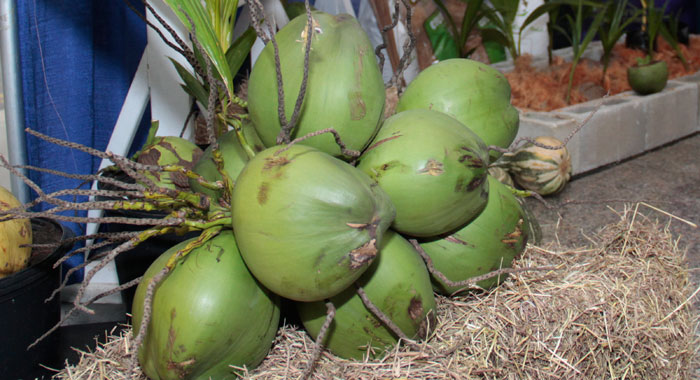 Coconut on display at Caribbean Week of Agriculture in Barbados.

BRIDGETOWN, Barbados — The coconut water that you buy from your local vendor should be from nuts that did not touch the ground before reaching you.

Further, the nut should have been washed and sanitised to ensure that no unwanted natural or other micro organisms enter your body, thereby making you sick.

That is according to revised standards for the Caribbean coconut water industry.

The new standard codifies good practices for harvesting coconut water, including how the nut is to be picked, handled, transported, washed, and sanitised.

It also speaks to how the actual coconut water is harvested and stored.

The standards were revised after the Caribbean Agricultural Research and Development Institute (CARDI) found unacceptable levels of coliform in coconut water that was being commercially marketed. They were devised in collaboration with the International Trade Centre and the EU-ACP Secretariat.

“You know and I know that we see occasionally in the press, foreign press … where there is an outbreak of some food-borne disease… You know nothing scares people more than they get a stomach bug and they have to spend a lot of time in the bathroom. We don’t want that to happen in coconuts. So, we need to institute a system that obviates that issue,” said Barton Clarke, CARDI’s executive director.

“Those results were somewhat discouraging and, therefore, we said,  ‘look, let us fix this problem’,” Clarke told reporters on the sidelines of Caribbean Week of Agriculture, taking place here Oct. 8 to 12, under the theme “Strengthening Agriculture for a Healthier Caribbean”.

He said CARDI, a CARICOM agency, engaged the CARICOM Regional Organisation for Standards and Quality (CROSQ), which determined that it would adjust the regional standard for coconut water.

The standards speak to acceptable levels of heavy metals, coliforms, how coconuts should be collected and processed to ensure the delivery of a healthy product.

“This is very much a part of making coconut water and other coconut products part of everyday life because we have to ensure that we do nothing to destroy the confidence of the consumer, relative to consuming these products,” Clarke said, adding that the standards go beyond coconut water to include the oil and pharmaceuticals.

“Part of our endeavour has to be to do the necessary research, engaging the food scientist, engaging the pharmacology expert to arrive at the correct and appropriate dosages for using coconut products so that we can again not compromise the health and wellbeing of persons.”

André Gordon, a scientist, is managing director of Technological Solutions Limited, the consulting firm that led the revision of the standards.

He said the best practice guide recommends that the coconut, when harvested, does not touch the ground.

“So it’s harvested, it should be lowered,” he said, adding that the coconut should then be placed in a container, such as a wooden or metal trolley that had been properly treated so that they don’t contaminate the nut.

“People will say, ‘Well, it is a coconut. Does it matter?’ Well, it does because whatever goes on the outside of the coconut, if it is not effectively removed, ends up in the water when the nut is cut, as our research has shown.”

At the plant, the coconut needs to be handled in such a way that it is not contaminated and must be washed after it is taken into the plant.

An effective detergent should be used.

After the coconut is washed to remove as much as the natural contaminants as possible, the nut is then sanitised.

It is recommended that sanitised stainless steel tables be used after the nut is sanitised.

“We recommend something around 50 parts per million hypochlorite be used,” Gordon said.

He, however, said that bleach can also be used but must be diluted to the level where it has been shown to be very effective in killing a lot of the unwanted microorganisms.

“These are the same things that cause the coconut water to spoil,” he said, adding that these microorganisms, if present, can cause illness.

He, however, noted that there is no evidence throughout the region of coconut water ever being implicated in illness from any of the major microorganisms.

“But we want to make sure that once it comes from the Caribbean, any country in the Caribbean following these practices people can be certain that there is no risk, whatsoever, of them getting sick,” Gordon said.

“They can also be certain if the best practice guide is followed, that they will have an extended shelf life.”

He said that at the coconut water harvesting facility, the processors should not walk from room to room and the layout of the facility is important in that regard to ensure that contaminants are not taken from area to area.

The tool used to open the coconut should also be sanitised.

Kept refrigerated, coconut water can last three to seven days, Gordon said, but if frozen, the drink can last between four and six months, depending on how it was handled during harvesting and processing.

“… once it is thawed the coconut [water] should be put in a refrigerator and held at less than 4 degrees [Celsius] and you should be able to get somewhere between seven and 14 days’ shelf life from the product,” he said.

In arriving at the standards, Gordon’s team looked at several research projects in the Far East and visited several Caribbean countries.

“Because there are significant differences and we wanted the standard to be a regional standard so it could work, regardless of how the industry was structured,” Gordon said.

“So now we have a standard that most processors around the region should be able to meet if they follow good practices,” he said.

In 2002-2006 Gordon and did extensive research as part of a UN FAO project involving the University of the West Indies.

The findings helped to advise best practices for the sector and also identify some of the issues peculiar to coconut water in general and to the Caribbean.