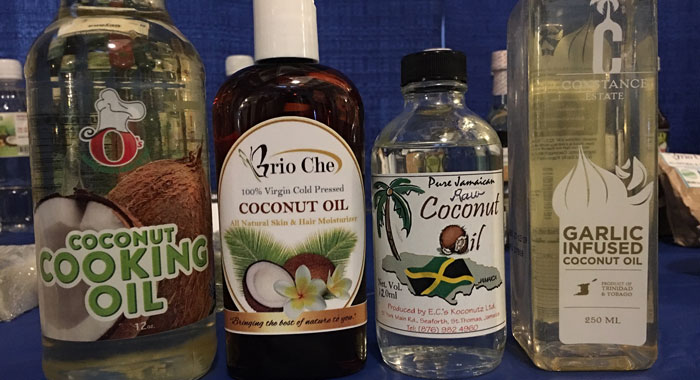 Coconut oil from across the Caribbean on display at Caribbean Week of Agriculture in Barbados. (iWN photo)

BRIDGETOWN, Barbados — As voices begin to reappear against the health benefits of coconut oil, the head of CARICOM’s agricultural agency says regional scientists need to become a part of the discussion.

He, however, said coconut oil was used for cooking, medicines and cosmetics.

He was asked to comment on a recent statement in August by Karin Michels, an adjunct professor of epidemiology at the Harvard T.H. Chan School of Public Health, that coconut oil “one of the worst things you can eat” and that it is good for wellbeing as “pure poison”.

Michels’ comment came at a time when there is an increased global demand for coconut products, which are being hailed as superfoods, signalling great potential economic benefits for the Caribbean.

Clarke said that the Caribbean can only join the lobby by way of partnerships.

“This is a discussion that we have with the Caribbean Public Health Agency and the University of the West Indies at Mona, the medical faculty, because we need to be part of that lobby. Too much is at stake for us to just sit back and say because it is Harvard and think that we need to accept it. No. We are scientists as well, and, therefore, we need to allow the science to speak the truth.”

He said that the Caribbean has to join with other coconut-producing regions to protect the integrity of the coconut as a healthy food and a safe ingredient in cosmeceuticals and pharmaceuticals.

“And there is almost a pact that we have established with our colleagues in the Pacific, because there is a parallel project going on right now in the Pacific also supported by financing from the European Union and we met last week in Brussels,” Clarke said.

Among the topics over the five-day period of the event, the opportunity is taken by regional organisations to host a number of workshops, which will be held simultaneously throughout each day. The Development of the regional coconut industry is the focus of one of the technical workshops being held during the five-day CWA, which is taking place under the theme Strengthening agriculture for a healthier future in the region”.

“Our dream for coconut is to restore it to where it becomes, once again, part of the fabric of life in the Caribbean; that we take advantage of the benefits that accrue.