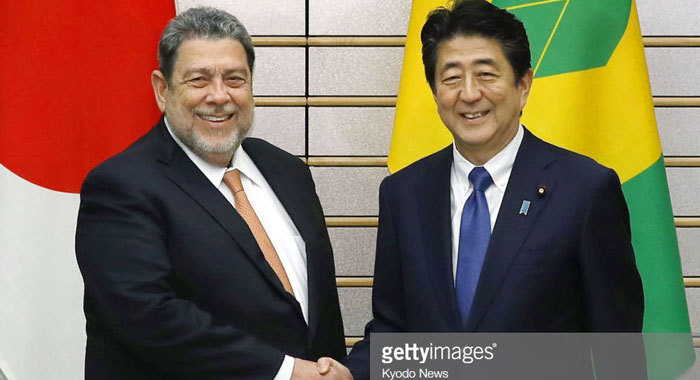 Prime Minister of St. Vincent and the Grenadines, Ralph Gonsalves, left, and his Japan counterpart, Shinzo Abe, held talk in August. It was not clear is SVG’s UN Security Council bid was among the topics they discussed.

TOKYO — St. Vincent and the Grenadines may be able to count on the support of Japan in its bid to become a non-permanent member of the United Nation’s Security Council.

Daisuke Nakano, Tokyo’s director, Mexico, Central America and Caribbean Division, with the Ministry of Foreign Affairs, did not say so explicitly when he spoke to Caribbean journalists here on Monday, but his comments hinted as much.

“I cannot say all that we are talking between governments,” he said when asked if Tokyo would support Kingstown’s bid.

“But what I can say is that both countries are in good cooperation. As you know, the Honourable Prime Minister Ralph Gonsalves was invited to Japan in August and had a very fruitful meeting with our Prime Minister, Shinzo Abe.”

After those talks, Gonsalves called on Japan to establish a strategic relationship with the CARICOM.

“I want to see Japan not just as having an ordinary relationship with CARICOM. I want them to see it is in their strategic interest to be very much involved in the CARICOM countries,” he told a news conference in Kingstown on his return.

Gonsalves told reporters that during his bilateral discussions with Abe, “we identified a number of areas within the strategic fray which dovetail with Japan”.

Kingstown is ramping up its bid for a non-permanent seat on the UN Security Council for the 2020-2021 period.

Gonsalves has expressed confidence that his government would secure the number of votes needed to represent the Latin American and Caribbean Group.

Nakano’s comments came during a discussion with two journalists from the Caribbean, who along with three of their Pacific Island counterparts, are in Japan, for this year’s Pacific-Caribbean Journalists Program.

He noted that Japan wants to become a permanent member of the UN Security Council, joining the ranks of China, France, Russia, the United Kingdom, and the United States.

The Japanese official said that as it related to the UN Security Council, CARICOM nations are “playing with rules that were decided before they became independent” states.

He said Tokyo shares the concerns of CARICOM countries as Japan is an island state and is affected by many of the same issues that CARICOM nations face.

On the issue of climate change, Nakano said that this year, Japan has been affected by torrential rains and unusually powerful typhoons (cyclones), similar to those that impacted the Caribbean last year.

Asked what are the ways in which Japan and CARICOM nations are co-ordinating to realise reform of the UN Security Council, he said Japan, CARICOM and many other countries believe that text-based negotiations or talks is key.

He said that while Japan, CARICOM nations and other countries in the world are in favour of opening these talks, not so many countries support such a move.

Nakano said Tokyo does not believe that the structure decided 70 years ago can adequately deal with current realities.

Any reform of the Security Council would require the agreement of at least two-thirds of UN member states in a vote in the General Assembly, and must be ratified by two thirds of Member States.