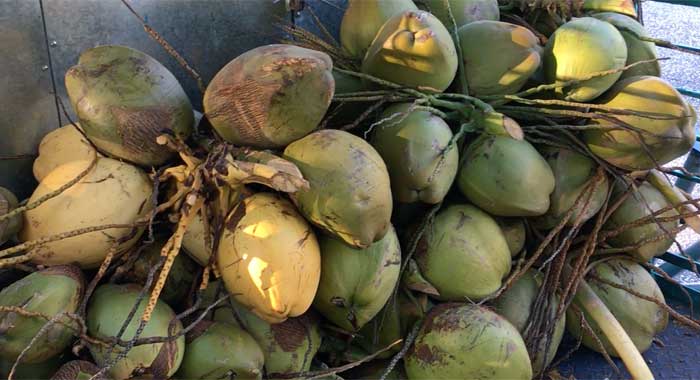 BRIDGETOWN, Barbados — CARICOM countries are taking steps to respond to the skyrocketing global demand for coconut water and other coconut products.

“Let us not fool ourselves. I do not believe that Pepsi and Coca-Cola would be making the kind of investment in coconut water if it was not a good thing,” says Barton Clarke, executive director of Caribbean Agricultural Research and Development Institute (CARDI).

“… we have it (coconut) right here on our doorsteps and we have the opportunity to make it very much part of the patrimony. But we have to do it properly, we have to do it right,” he further told iWitness News during Caribbean Week of Agriculture (CWA 2018) in October.

According to Reuters, the worldwide market for coconut water is expected to grow at a compound annual growth rate (CAGR) of roughly 14.4 per cent over the next five years, will reach US$13.8 billion in 2023, from US$6.2 billion  in 2017, according to a new Global Info Research (GIR) study.

“But supply has remained fairly constant, because we are still treating with a lot of very, very old trees globally [in] India, Brazil, Mexico — because once the trees go past a certain age, they start to decline in productivity. So there is the opportunity to plant additional amounts of coconut,” Clarke said.

He said part of CARDI’s remit, therefore, “is to be able to show people the money — the small farmer, the big processor, the government; that if you invest in coconut, there are returns.

“So the numbers we have suggest that we are on a good path,” he said.

However, the region is very much within a development mode, where it is taking and transferring technology, training farmers and extension officers, conducting industry analyses, doing value chain analyses.

“But we also need to make an investment in some of the more traditional research areas.”

Clarke said technical experts must help farmers to select coconut varieties that are resistant to pests and diseases and produce a lot of water or copra, depending on the market niches.

Another consideration is integrated pest management solutions so that pests are no longer an economic problem and that the nutrient requirement of the coconut plants is clearly identified and provided through organic or inorganic fertiliser, depending on the bent of the particular clients.

“We need to continue the market research so that we can have increased penetration into the tourism sector so that we would want to see the day that every tourist that comes to the Caribbean has a coconut experience, drinks a coconut water, eats a tablet, takes a little rum and coconut water, goes into the spa and be treated with coconut products.”

He said that requires greater investment in research and a look at some of the contemporary research tools to help expedite the rate at which technology is delivered.

Jamaica has done a lot of this work and is producing a hybrid coconut palm, the Maypan, which is a cross between Malaysian Dwarf and the Panama Tall.

“They have been found to be not as susceptible to lethal yellowing as the Panama Tall. A similar programme is underway in Belize.

“So these, too, need to be intensified so that we can have far greater amount of planting material available to supply the industry,” Clarke said.

He said that Jamaica, Belize and Guyana have planted an additional 10,000 acres of coconut over the last four years.

But industry analysts suggest that over the next 10 years, 250,000 more acres of coconuts will be planted, requiring 17.5 million plants.

Clarke said this will not be available by planting seed nuts and research will continue into the rapid multiplication of germplasm to help to respond as quickly as possible.

Among those leading the effort to respond to the increasing demand for coconut plants is Vincentian crop scientist, Andrea Veira, who is based at CARDI’s field station in St. Lucia, which is seen as the Organisation of Eastern Caribbean States hub for CARDI.

Any successes in St. Lucia will be scaled up across the region.

Veira said CARDI has been working with farmers to establish nurseries, which are developed from the selection of good nuts from existing plants.

“What is happening right now is that the plants in St. Lucia, like most of the Caribbean countries, they are very old so yields are significantly less. So we are going through the process of characterising what exists to select nuts that are good rather than have a farmer just pick up what is on the ground, which is the tradition.”

There were 2,000 tissue culture plantlets at the station, which were imported from Mexico in August. CARDI St. Lucia is weaning and hardening the plants — a six- to seven-month process.

“And those tissue culture plants would eventually be available for farmers to purchase at a subsidised rate.”

For farmers who are expanding their coconut cultivation the traditional way, via seed nuts, Veira said that they should examine the way the shoot is germinating.

“Is it coming directly vertically up? Is it diagonal? Is it horizontal? The best one would be vertically — right up. And the nut itself, you have to look for damage in different areas to select accordingly.”

She said that the main pest in St. Lucia is the red palm mite and CARDI is testing an organic chemical called Mitex.

“It’s clove-based… we are about to take the second set of data collection to really determine if there was an effect from it and what that effect was.”

CARDI is also collecting germplasm from what is on the island.

Meanwhile, Clarke said that in addition to pests and diseases, the coconut industry has had to confront the lobby from soya bean and other oils, which said coconut oil is not good for consumption.

“Our dream for coconut is to restore it to where it becomes, once again, part of the fabric of life in the Caribbean; that we take advantage of the benefits that accrue,” Clarke said, noting the longstanding use of coconut oil in cooking and cosmetics in the Caribbean.

He told iWitness News that without attention to the issues of productivity, profitability, safety and environmental concerns, nothing can be done in the regional industry to take advantage of the emerging global market.

He said that CARDI has been trying to address this by identifying and selecting to be multiplied and distributed to farmers, local varieties that have high water content and high propensity for producing oil.

This is in addition to the pest management plots.

The initiatives are designed to improve productivity and the profitability of the farmers, Clarke said, adding that in his home country, Barbados, more farmers are planting more coconut trees in response to increased demand.

“And we still haven’t broken into mainstreaming coconut water,” Clarke said, even as he noted that coconut water has begun to appear on supermarket shelves in Trinidad, Jamaica, Guyana, and Barbados.

“But, even then, we are still not ensuring by way of marketing and promotion that everybody, more people, drinks coconut water.”

Regarding the scourge of chronic non-communicable diseases across the region, Clarke said:

“Wouldn’t it be great if we can have an effective policy that sees the replacement of the sugary beverages in the menus at the schools, by using coconut water?