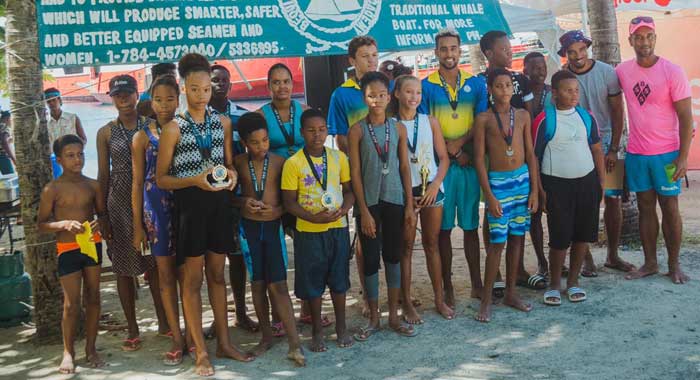 The Bequia Traditional Sailing Academy in collaboration with Rising Stars Swim Team and the SVG Swimming Federation hosted its open water swim meet in Bequia last Sunday as part of the Independence Regatta.

The starting point of the races was at the southern end of the Princess Margaret beach. The course continued up along the coastline, culminating at the Almond trees in Port Elizabeth harbour.

Nineteen swimmers competed in three events across various age categories. The 375-metre event was favoured by the 11 and under age group.

Kylia Ollivierre and Sandy Friday were first and second in the female category while the male category was dominated by Dennis Sutherland, Omarion Federick, and Aiden Ollivierre: first, second and third.

The overall male and female champions were Dennis Sutherland and Kylia Ollivierre.
In the 750m event, there were two categories of males and females, ages: 13-14 and 15 and over.

In the 13-14 female age group, Kate Ollivierre and Ariana Ollivierre were first and second.

Samarie Ragguette was first in the male 13-14 age group.

In the 15 and over female category, Krista Bynoe was first and in the male 15+ Kyle Dougan and Carsini Pollard were first and second.

Kate Ollivierre and Samarie Ragguette were the overall female and male champions in the 750 m event.

Cruz Halbich, Tavonte Forde, and Alex Cyrus were first, second and third in the 1500m open male and female event.

Mya Defreitas took first place for females. The overall male and female champions of that event were Cruz Halbich and Mya Defreitas.

Organisers expressed to all who made the event a success, including coach Tauran Ollivierre, the nurses, Fantasea Tours for providing the safety boat, BTSA for providing the snacks and the trophies, SVGSF for the medals and caps, Rainbow Radio League for safety support, and officials Jonelson Compton, Zane Friday , Delroy Stapleton and Ralph Stowe, Tyrell Ragguette .