Lessons for SVG from Japan’s 2011 tsunami 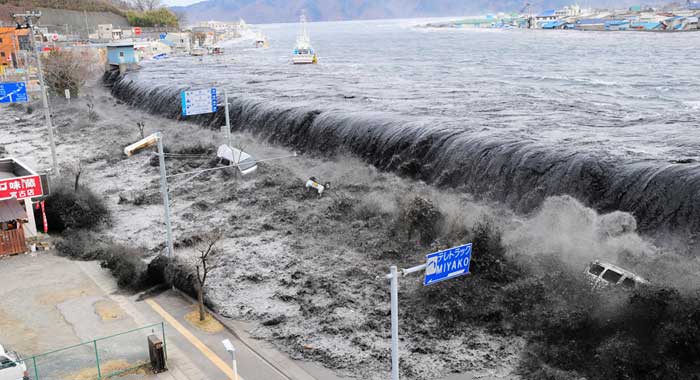 SENDAI, Japan — Today (Nov. 5) is World Tsunami Awareness Day. St. Vincent and the Grenadines (SVG), like the rest of the Caribbean region, should take note.

The Caribbean is prone to earthquakes and other seismic activity that can result in tsunamis.

A tsunami is an ocean wave or series of waves caused by a sudden disturbance of the ocean floor that displaces a large amount of water, the University of the West Indies Seismic Research Centre says.

The centre says tsunamis are caused generally by earthquakes, less commonly by submarine landslides, infrequently by submarine volcanic eruptions and very rarely by large meteorite impacts in the ocean.

This city in north-eastern Japan offers a lasting reminder of the potentially devastating power of tsunami waves.

More than seven years have passed since the March 11, 2011 Great East Japan Earthquake and ensuing tsunami ravaged the region. But in places like Arahama, a small seaside community in Sendai, the scars are still plain to see.

The waves unleashed that day were so large and powerful that they breached a 21-foot-high sea wall and travelled more than half a mile inland.

All told, the earthquake and tsunami left 19,301 people dead around the Tohoku region, and 121,805 homes were destroyed, according to the Sendai City government.

SVG is home to an active volcano, La Soufriere, which last erupted in 1979. Further, the submarine volcano, Kick ‘em Jenny, located between Grenada and SVG, puts both nations at risk, should an eruption result in a tsunami.

Tsunamis are rare events, but can be extremely deadly, the United Nations says, adding that in the past 100 years, 58 tsunamis have claimed more than 260,000 lives, or an average of 4,600 per disaster, surpassing any other natural hazard.

The highest number of deaths in that period was in the Indian Ocean tsunami of December 2004. It caused an estimated 227,000 fatalities in 14 countries, with Indonesia, Sri Lanka, India and Thailand being hardest-hit.

At a building converted from an elementary school to a tsunami education centre after the March 2011 disaster, Yoshiaki Ootomo, assistant director of Sendai’s Disaster Risk Reduction Promotion Section, told participants in the 2018 Caribbean Pacific Journalists Programme that the tsunami claimed the lives of 10 per cent of Arahama’s 2,200 residents.

All of the students and staff, along with residents who sought shelter at the school, were rescued. They had moved to the rooftop after the waters rose to the second floor of the building, one of the few that survived the tsunami’s onslaught.

The death toll in Arahama and other areas could have been higher had it not been for the Sendai Bosai Leaders (SBL) — “bosai” being the Japanese word for “disaster preparedness”.

The SBLs are at the apex of a network of 600 volunteers, with each SBL being in charge of 10 neighbourhood groups. These groups have been trained to respond in the event of a natural or man-made disaster.

Takeshita Hasegawa, an SBL, says that the groups help to manage evacuation centres and to ensure that evacuees are as comfortable as possible.

In addition to community leaders, general knowledge of how to protect oneself and others also played a significant role in saving many lives.

Akira Nemoto, director, Kaigan Park (Seaside Park) Adventure Field, was at work when the tsunami came ashore at the park, located about a half mile from the coast.

He said it was ironic that people came to the seaside park because of its location, although it was impossible to see the sea from there. The view was interrupted by the tall, dense pine trees — only a handful or so of which survived the 27-foot tsunami.

But on that day when the tsunami came ashore, persons who were at the park heard the sound of the advancing waves as it mixed toppled pine trees with other debris into a soup of destruction that flattened almost everything in its path.

A Self-Defense Forces helicopter rescued five persons, a dog, and a cat who had sought refuge at the highest elevation at the park.

The park then remained closed until just three months ago, having been used as a temporary storage ground for debris. The park was also elevated so as to reduce the extent of flooding from any future tsunami.

As a result of the (earthquake and) tsunami, 19,301 persons died (or went missing) and 121,805 homes were destroyed, according to Sendai municipal government statistics.

As in many Caribbean countries, the beach was a magnet for visitors in Arahama, which attracted 40,000 visitors the summer before the tsunami.

Its technological advancements — including an early warning system — and frequent drills notwithstanding, Japan still recorded a high number of deaths as a result of the tsunami.

But the country is drawing on the experience to prepare, and try to prevent another catastrophe should a similar event occur.

Akira Saitou, assistant director of Sendai’s Disaster Prevention Section, said that since the tsunami, 11 evacuation towers, each 33 feet high with concrete rooftop accessible by stairs and wheelchair access, have been constructed.

Sasayashiki Tsunami Shelter in Arahama is a three-storey tower that can accommodate 300 people on the second floor and flat rooftop.

Residents of Sendai are told that in the case of a tsunami warning, people should drive inland to higher ground, Saitou said.

The evacuation towers are intended for persons who can get to them on foot within 15 minutes of a tsunami warning — or from as far as half a mile away.

Soil liquefaction often occurs after an earthquake. According to the United States Geological Survey, this phenomenon occurs when saturated sand and silt take on the characteristics of a liquid during the intense shaking of an earthquake.

This can cause buildings to collapse. Therefore, Arahama’s tsunami shelters are built on piles driven into the bedrock.

The Sasayashiki tsunami shelter doubles as a facility for fire fighters. When not in use, the shelter is locked, but can be opened easily by breaking plastic sheeting near the lock.

Vandalism of tsunami shelters is not a consideration in this country, where there is little crime and respect for public property is widespread.

Inside the tsunami shelters, evacuees will find food and water enough for three meals for 300 persons. The food and water have a five-year shelf life.

The centre is not intended as an emergency shelter, so people who flee there are expected to be evacuated elsewhere before a fourth meal is required.

There are blankets, heating stoves complete with cans of gas to power them — should a tsunami strike in the winter — and an air conditioner should one occur during the summer.

The shelter has solar panels on the roof and there is also an electricity generator.

Should a tsunami affect SVG, the nation’s capital, Kingstown, along with all other coastal towns and communities, could be at grave risk.

This video was produced locally by NEMO in collaboration with a number of popular local soca artistes, through funding from the Caribbean Disaster Emergency Management Agency (CDEMA) under the Country Directed Fund (CDF).

NEMO will also hold an exhibition at the car park next to the Postal Corporation Building in Kingstown, commencing at 8 a.m.

The main purpose of the exhibition is to heighten awareness on tsunami and other geological hazards such as landslides, earthquakes and volcanic eruptions.

NEMO is involved in a Tsunami SMART Schools and Communities Project in collaboration with the Caribbean Disaster Emergency Management Agency (CDEMA), the Ministry of Education and the Seismic Research Centre (SRC) with funding from the European Union through CDEMA’s Country Directed Fund.

The project is also piloted in the communities of Rose Place and Union Island.

“The residents, business operators in these communities and surrounding areas and also the staff and students of the beneficiary schools under this project were trained in tsunami science and developing tsunami evacuation plans and procedures for their businesses, schools and the communities,” the emergency response agency said.

In March 2018, NEMO conducted tsunami evacuation drills with the community of Rose Place, Kingstown Anglican School, and the Clare Valley Government School and community as part of “CARIBE WAVE 18”, the annual tsunami warning exercise for the Caribbean and adjacent regions.

The Tsunami SMART Schools and Communities Project will end in December 2018 with the placement of tsunami signs in the beneficiary communities.

NEMO is also implementing the UNESCO IOC CARIBE EWS Tsunami Ready Pilot Project in the coastal communities from Kingstown to Argyle. This project is funded by the USAID/OFDA with support from the Caribbean Tsunami Warning Protocol Programme of UNESCO.

This worldwide event is supported by the Government of Japan, and is used as an opportunity to showcase good practices related to tsunami.

Tsunamis are rare, but their impact can be extremely deadly and devastating. Tsunamis are often accompanied by natural signs: FEEL, SEE, HEAR. Knowing the warning signs are important and community and individual understanding about how and where to evacuate before a wave strikes can save lives.

Natural Warning Signs of a Tsunami

Tsunamis can be detected using our human senses.