Children 6 & 10 among family living on streets of Kingstown 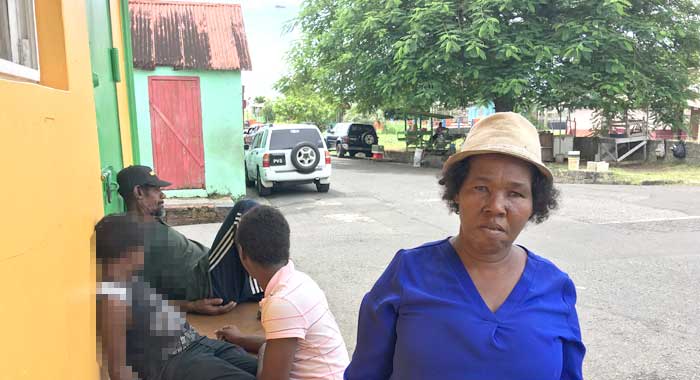 A family of five, including two minors — a 10-year-old girl and a 6-year-old boy, and an 18-year-old who is still studying — has been living under a tree in Kingstown for almost four months.

Inola Haynes, 47, originally of Green Hill, said they were evicted from their rented home in Questelles almost four months ago because of her boyfriend’s drinking problem.

“He drinking rum and behaving bad so they throw him out and tell him we have to go.

“I don’t live anywhere. Is all about under gallery I sleeping,” she told iWitness News on Wednesday while sitting on some steps outside a building on McCoy Street.

She was sitting there with her son and her boyfriend near the tree where they spend most of the day.

The children go to a school in Kingstown.

On Wednesday when we spoke to Haynes, she said her 10-year-old daughter had gone to school but her 6-year-old son did not attend that day because someone had stolen his sole school pants after she had washed and hung it out to dry the previous night.

“Dem shed dey have all over Tokyo is where we does sleep,” she told iWitness News, referring to the bus terminal.

Haynes said went to the Social Welfare Department seeking assistance and was told to look for somewhere to rent and the state will pay for the tenancy.

Her son explained that the Social Welfare Department has said that rent must be EC$450 or less per month to be funded by the state, but such a place is difficult to find.

“I still looking and I ain’t find nowhere. I ain’t working anywhere,” Haynes said, adding that her children’s father does not support them.

She said that her current boyfriend is not her children’s father.

Haynes told iWitness News she supports her children with “whatever little I pick up”.

“If somebody could help me, help me with a shelter, me and me children and them,” she said.

Sometimes, when it rains at night they have to leave the sheds under which they are sleeping.

At times, they would get the odd job to wash vehicles. The family has nowhere to cook and would eat light food such as bread and fried chicken, which they buy in Kingstown.

“Sometime, when we get a little money, we will go to a restaurant and buy fast food, like Chinese food and things,” she said.

“When we ain’t have enough we will go to Yankie and buy bread and chicken and Busta [carbonated drink] or tea or something,” she said.

The woman cannot tell when was the last time she ate a meal of the type she would have cooked when she lived in a house.

She and her family shower at the public bath in Rose Place.

“It’s rough for me,” she told iWitness News when asked what it has been like over the past few months.

She said her children were “coping as usual.

“They don’t have nobody to stand up for them. It’s me alone as father and mother,” she said adding that while people know they live on the street, she doesn’t know if her children’s schoolmates are aware.

Haynes said her son has complained about a schoolmate who always locks him up in the classroom.

Haynes did not live with her parents for much of her life.

“My parents gave me away since I small to a woman in Union. My brothers and sister? I have one in the Grenadines, I have a brother in Green Hill but dem dey don’t study me as much.

“Anybody outside that listening me, if you could help me please and my three children,” Haynes said in appealing for assistance.

“Basically, we don’t have anywhere. We just sleep under sheds, under galleries. It’s life. Sometimes, you don’t have. You have to go with what you have…

“It ain’t nice. It aint nice out there. Sometimes you meet violence, you get in trouble at nights when you are sleeping. People come and trouble you. All sorts of things,” he said.

“They might tell you ‘Move from there!’ The might want to fight. Sometimes they even run you down,” he said.

The youth said he went to West St. George Secondary School and left when he was to enter Form 3.

“The situation was – home-wise and other things,” he said. “Like getting money to go to school, things like that. It really wasn’t there for me. I end up dropping out.”

The youth said he worked with Premium Security for a year and gained some work experience and made new friends.

He, however, said the long hours and low pay were taking a toll on him.

“It really wasn’t too bad but I really couldn’t undergo with it because of the kind of hours,” he said, adding that he was living at Sharpes at the time.

He said that after quitting the security firm he tried his hand at vending but that also did not work out.

The younger Haynes says he works at a part-time employee with the Public Health Department, but no work is available currently.

He said he hopes that his family’s homelessness ends “very soon”.

“Right now, I’m doing some classes to get subjects: maths and English,” he said.

He said the government pays his tuition and knows that his family lives on the street.

“They told my mom to go and find a place but the price range — they say they don’t pay anything more than $450 for rent. And that’s very difficult to find.”