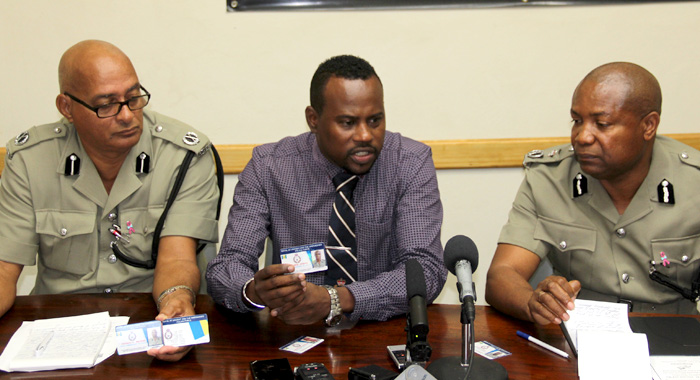 Members of the Royal St. Vincent and the Grenadines Police Force now have more secure and modern identification cards.

The cards were revealed to the media on Wednesday.

Acting Commissioner of Police Colin John said the public, from time to time, would complain that the police arrested them and never showed them an identification card.

“We are making the public aware that we, in fact, have an identification card.

The police chief said police officers had complained that when transacting business, some establishments were reluctant to accept, and, in some cases, refused the police ID as a form of identification.

“We have spoken to the Chamber of Commerce and they have given us some advice as to how we can upgrade or enhance the police ID. We have done that and it is our hope that the members of the business fraternity would accept the police ID as a form of identification.”

Meanwhile, Corporal Syon Shoy, an information technology specialist, said security is paramount and a lot of things were taken into consideration in the design and production of the cards.

“This ID is similar to the national identification card or the driver’s licence and they have all of the features that you are looking for in the security.”

He said the card has an issue and expiry date, the name and rank of the police officer, the National Insurance Services number, voter’s number and national ID card number.

“So all of the information on the national identification card is on our police ID. … It is authentic and it is not easy to replicate,” Shoy said.