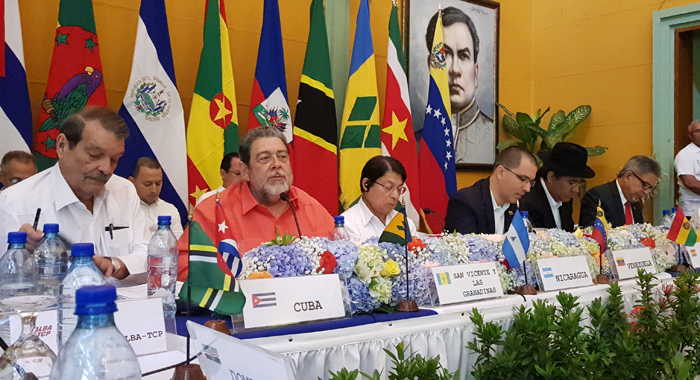 Gonsalves reiterated this call while addressing foreign ministers and representatives of the Bolivarian Alliance for the Peoples of America (ALBA) in Managua, Nicaragua on Thursday.

ALBA Representatives met in Managua for the 17th Meeting of the Political Council of the Bolivarian Alliance for the Peoples of America — Treaty of Trade of the Peoples (ALBA-TCP) to discuss geopolitical issues among the nine-member grouping.

The Council reaffirmed its commitment to strengthening solidarity among member countries, while urging governments within the region to consolidate advances in the progress towards integration.

Gonsalves said the region must work in a co-ordinated manner to address several issues relating to trade, the movement of people and climate change.

He told delegates that ALBA must focus on specific programmatic elements that are people-centred in order to advance the regional integration process.

“I want to reaffirm the point that ALBA is more relevant [now] than ever and we have to strengthen the people-to-people connection within Latin America and the Caribbean by linking and uniting our peoples,” Gonsalves said.

In his support for a stronger push towards deepening the integration process, Gonsalves noted that St. Vincent and the Grenadines has no visa requirements for ALBA member countries and urged other countries to examine visa restrictions within the regional bloc.

Sen. Carlos James was the other member of the SVG the delegation at the event.

The Bolivarian Alliance for the Peoples of America (ALBA) was created on Dec. 14, 2004 in Havana through a constitutive treaty signed between Cuba and Venezuela, which was later joined by Antigua and Barbuda, Bolivia, Dominica, Ecuador, Nicaragua, St. Lucia, St. Vincent and the Grenadines, Grenada, and St. Kitts and Nevis.