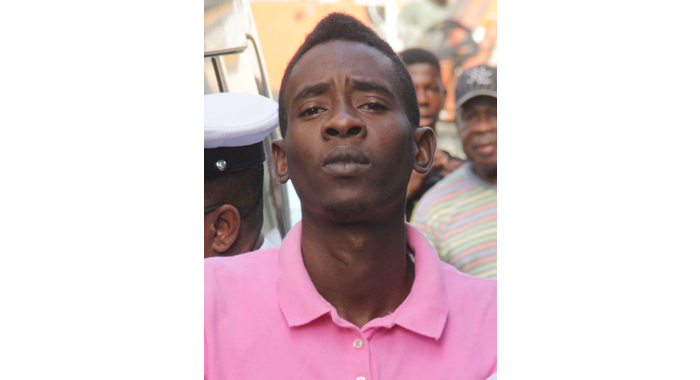 Lara Carter is accused of trying to murder his girlfriend. (iWN photo)

Lara Carter, 26, the Ottley Hall man who is charged with attempting to murder his girlfriend, Benisha Baptiste, 23, by shooting her in both legs, will have to wait until Friday to find out if he will be granted bail.

When Carter’s bail review came up again at the Serious Offences Court in Kingstown, on Monday, Senior Prosecutor Adolphus Delplesche reminded the court that one of the Crown’s objections to bail was the fear expressed by the virtual complainant.

He said that he had shown defence counsel Grant Connell a statement from Baptiste, in which she expressed that fear.

However, Connell said that the Director of Prosecutions would have to get Baptiste’s statement in the form of an affidavit before the claim could come before the court.

Connell argued that it was highly prejudicial for the prosecutor to just come to the court and say that the virtual complainant was fearful of the accused.

But Delplesche countered, saying that the statement was taken from Baptiste’s deposition, adding that he was not seeking to tender it to the court.

But Connell was having none of it, saying, “That could be a dead man. It could be the findings of a person who no longer exists.”

But Delplesche told the court that the staff of the Office of the Director of Public Prosecutions is in the process of preparing an affidavit to reflect Baptiste’s concerns.

He asked the court for some time to get the affidavit ready, saying that the DPP’s staff is very involved at the High Court.

The prosecutor said that his reference to the deposition was to inform the court of what the prosecution has.

“We will bring the real McCoy,” Delplesche said in his usual jovial style.

But Connell countered, saying that the prosecution knew that there was a bail review that day and should have prepared the affidavit.

He contended that Delplesche should not be permitted to rely on a deposition, which the lawyer said is subject to “a paradigm shift in evidence that is subject to cross examination, subject to change.

“What caused her to say that? It could be a tool of convenience,” the defence counsel said.

Chief Magistrate Rechanne Browne noted that the charge is a serious one, adding that she does not want to take it lightly.

Carter is accused of shooting Baptiste about 9:15 p.m. on Oct. 14 at Ottley Hall.

Carter had been on the run from police since the shooting and was apprehended in South Rivers two weekends ago.

He was denied bail when he was initially arraigned before the chief magistrate on Nov. 5.

Carter and Baptiste had a relationship that produced a child who died this year.

While at this time they are on opposite sides of the charge, the duo was jointly charged with gun-related offences earlier this year.