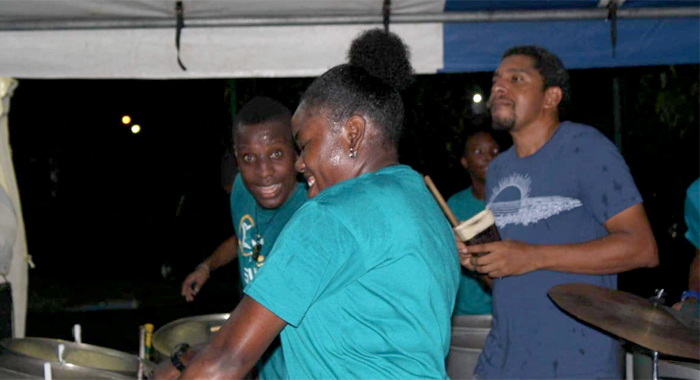 Member of Parliament for East St. George, Camillo Gonsalves plays the cowbell with Epic Sound at the launch of the calliaqua-based pan side on the weekend.

The Pan Against Crime Committee (PAC) on Friday launched Epic Sounds, its 14th steel orchestra since the programme began in 2008.

The launch at the Calliaqua Hardcourt included the handing over of a number of steel pans.

The event brought much energy and entertainment to a wet and cold evening in the Calliaqua community.

Among the performers were students of the Fair Hall Primary School and Symphonix Steel Orchestra out of Questelles — the first pan side that was launched under the PAC initiative.

They played skilfully under the leadership of Jomorro Francis and made it clear to the appreciative audience that they are a force to be reckoned with in the pan arena.

When it was their turn to play, Epic Sounds brought so much energy and life to the Calliaqua Hardcourt that it was reminiscent of the Steel and Glitter panorama event at Vincy Mas 2018.

With their leader Johnney “JP” Pompey on drums, Epic Sounds Steel Orchestra played a variety of musical genres including gospel, soca, and dancehall.

And to showcase their versatility, some of the band members even turned vocalists and sang to the sweet music of their brand new steel pans.

Adding to the musical accompaniment and entertainment package at the event was the Police Band, under the leadership of Assistant Superintendent of Police and Band Master, Daniel Hall.

The band, as usual, played with dexterity and had the crowd calling for more performances.

Camillo Gonsalves, parliamentary representative for East St. George and minister of finance and economic planning, delivered the keynote address at the event.

He said that while Calliaqua has had one of the best pan sides in SVG, there was a fall-off since 2015, because the town’s steel orchestra did not make it to Panorama competition nor compete in Carnival activities for years.

Gonsalves said he was approached by pan enthusiasts Danielle Payne, Crystal Oliver, and Pompey, all members of Epic Sounds, saying they would like to be a part of the revival of steel pan in East St. George.

The minister said the team presented him with an impressive business plan and he assured them that he would do his best to enhance steel pan music in East St. George and ensure that Epic Steel Orchestra receives new steel pans and be among the premiere steel orchestras in SVG. 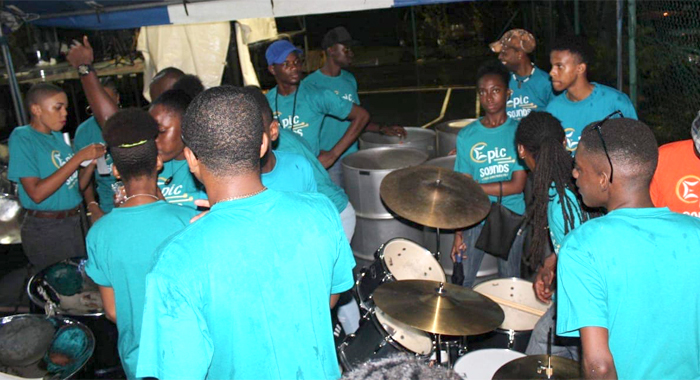 The finance minister said Epic Sounds was invited to play at the opening of the Calliaqua Town Hall building and they were so impressive that they caught the attention of Prime Minister Ralph Gonsalves, who promised to procure brand new steel pans for them.

The minister further stated that PetroCaribe spent over $60,000 to buy brand new chrome steel pans from Trinidad and Tobago.

He also informed the audience that a Vincentian is currently in Trinidad and Tobago learning how to tune the steel pan and PetroCaribe has recently funded another Vincentian to go to that country to learn the art of pan tuning.

Minister Gonsalves expressed appreciation to Venezuela for their generosity to the PAC initiative.

He said Caracas has funded half of the pan sides launched under PAC.

He told the gathering that Epic Sound performed at this year’s panorama competition and did a commendable job.

But now that they have their own steel pans and pan yard, he expects them to perform better in 2019, the minister said.

He congratulated the PAC Committee on the job that it is doing to guide the youths on the right path.

He said that the initiative is bearing fruit because instead of choosing to be on the road, liming on the block or getting into mischief, the young people chose to come to the Calliaqua Playing Field to play pan.

According to the minister, that is exactly what PAC is about, adding that the best work against crime is preventative — finding positive things for the youths to engage in. 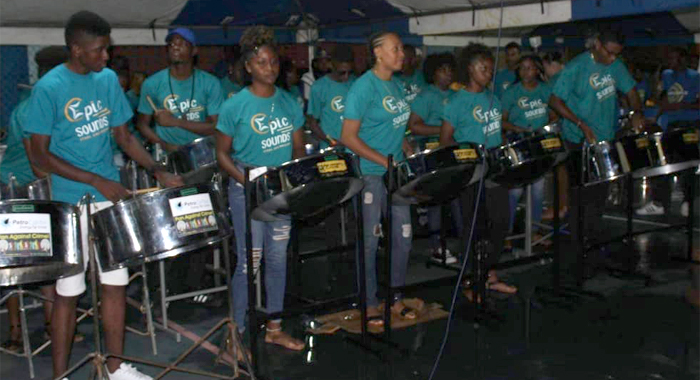 Meanwhile, Commissioner of Police, Colin John noted that Pan against Crime (PAC) is one of the anti-crime initiatives that were launched by Prime Minister Ralph Gonsalves in February 2008.

There are 27 Police Youth Clubs throughout SVG with a combined membership of 745, the police chief said.

Commissioner John informed the audience that every year, members of the RSVG Police mentor, tutor and educate hundreds of youth in many different subject areas with a view of keeping them on the “straight and narrow” — a life that is free from crime and other perils.

In her remarks, La Teisha Sandy, deputy chair of the National Commission on Crime Prevention (NCCP), said that since its formation, the NCCP has placed young people at the centre of its programmes.

Sandy said that if the youth of the nation have more positive and productive things to do, this can ensure that they grow up to live crime-free lives.

She pointed out that one of the issues that her organisation has focused on is underage drinking and has conducted a campaign to educate the population, especially young people, about the legislation dealing with underage drinking which stipulates that the legal drinking age is 18 years.

Sandy said that persons under the age of 18 years should refrain from drinking alcohol and should not be selling alcohol or be sent to purchase it.

She said that the sensitisation drive was well received by the public and many persons were not aware that there is a legal drinking age.