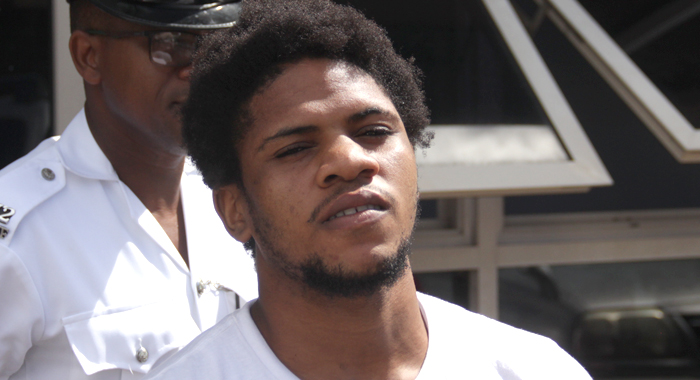 The Redemption Sharpes youth who was on Thursday charged with attempted robbery and assault has been charged with robbing a man of a loaded gun and other items.

Jerroy Phillips, a 22-year-old fisherman of Redemption Sharpes, was brought before the Kingstown Magistrate’s Court on Monday, where he was charged that on Nov. 1, 2018, at Indian Bay, being armed with a gun, he robbed Osborne Bowens, of Glen, of one brown leather wallet, value EC$150, containing EC$80 in cash, one black and silver Huawei cellular phone, value EC$2,000, one black Glock 19 9 mm pistol — serial number YBK-804 with 15 rounds of ammunition, value EC$3,030 — total value EC$5,260 — and at the time of doing so and in order to do so, put Bowens in fear of being then and there subjected to force.

Phillips was denied bail and was ordered to return to court on Nov. 28, 2018.

He was arraigned on a day that a trial began in a matter in which he and Andre Gibson are charged in connection with the theft of four puppies.

Last week, Phillips was charged that about 2 p.m., on Sept. 19, at Mc Kies, he attempted to rob a 65-year-old businessman of Mc Kies Hill and in the process of doing so attempted to shoot the said businessman with a gun.

Phillips was also charged with boxing a 19-year-old bus conductor of Redemption Sharpes on his upper lip, causing him actual bodily harm about 5:30 p.m. on Oct. 6.

He is also a suspect in the Sept. 14 shooting death of Sabitree Lyttle, a domestic, of Redemption Sharpes, whose family operates a provision shop at their home.

The magistrate sentenced the men to four-year jail terms suspended for 18 months, after they pleaded guilty to burglary and damage to property.