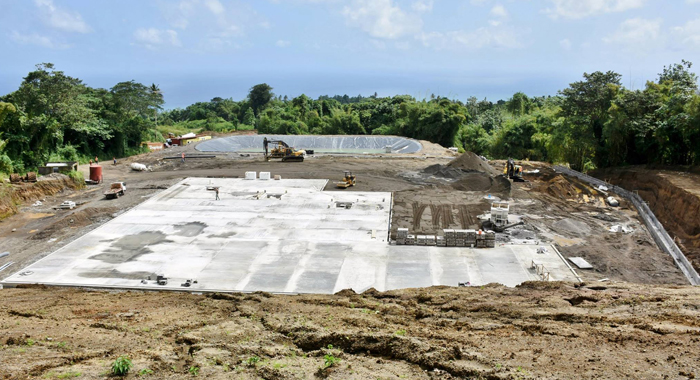 Civil works started in the second quarter of 2018 and turbines expected to be tendered out in 2019. (Photo: Lance Neverson/Facebook)

St. Vincent Geothermal Company Limited (SVGCL) and Jardboranir hf. (Icelandic Drilling Company, IDC) have signed a contract for the drilling of four wells in St. Vincent and the Grenadines (SVG).

The wells are intended to supply steam for the geothermal power plant SVGCL is constructing. The project aims to deliver a 10 megawatt geothermal power plant, transforming SVG energy sector, reducing its dependency on imported diesel, and providing a new sustainable and affordable source of energy based on an indigenous resource.

Once operational, the plant will supply substantially all of SVG’s baseload power and bring renewable energy sources to 73 per cent of total power generation, well in excess of SVG’s Energy Action Plan target of 60 per cent by 2020.

The commissioning of the plant is expected to be in approximately two years. The development of the plant has been ongoing for some time with civil works starting in the second quarter of 2018 and turbines expected to be tendered out in 2019. SVGCL is a public-private partnership owned by the Government of SVG and Reykjavik Geothermal, an Icelandic company focusing on geothermal power development with projects in East Africa, Mexico and the Caribbean.

According to Sigurdur Sigurdsson, CEO of Jardboranir (IDC), this is the fifth drilling contract in the Caribbean, but Iceland Drilling have been working in the area since the year 2011, both in Dominica and in Montserrat.

Iceland Drilling says it has a broad range of highly qualified and experienced experts in the field of high temperature deep geothermal drilling.

“We look forward to creating value for our customer.”

The project is being supported by several international organisations. The Caribbean Development Bank (CDB) is the lead financier, and is also coordinating funding from the international development community in the form of grants, contingent recoverable grants and concessional loans.

The Inter-American Development Bank, using resources from the Clean Technology Fund and the Global Environmental Facility, has provided a CRG to mitigate risks associated with the drilling phase of the project.

The United Kingdom Department for International Development and the European Union Caribbean Investment Facility are also lead contributors to the project.

Other major sponsors include ADFD via IRENA, and the Governments of New Zealand, Japan and the United Arab Emirates.

The project has also received assistance from international bodies such as CCI, RMI and Carbon War Room.

Supervision and engineering for the drilling will be provided by Jacobs.